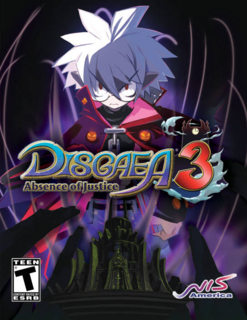 Disgaea 3: Absence of Detention is one of the best games to have on the system. My Darkzero review.

Disgaea 3's main storyline remains unchanged from the PS3 version, which means it's still set in the Netherworld school of Evil Academy, where players follow Mao, the number one honour student at Evil Academy. Mao happens to be the son of the Overlord of the Netherworld and has never attended classes since his school years have started. "Whoa?" I hear you say, "How can he be an honour student then?" In the world of Disgaea 3, being an honour student requires you to skip school, ignore your homework – yeah, all the rules are backwards to real world honour student behavior. I bet the youth of today would love to take part in that education.

Mao has one goal in mind while being the top dog at school – to get revenge (or should that be revengeance?) on his father and become the new Overlord. Why? Because his father destroyed his video game collection, causing him to lose millions of hours of game time – that's enough to make any hardcore gamer rage in his boots. The story may sound silly, but Disgaea games have never taken themselves seriously, instead opting for more outrageous characters and quirky dialogue scenes, which in Disgaea 3 makes the adventure with Mao that much more enjoyable.

Even though this may be the third title in the series, there's no harm in picking it up if you've never touched one before. The story sits by itself and the only aspects you won't understand are the small cameo appearances by characters from other games in the series. It certainly won't spoil any of the fun to be had with Disgaea 3 on the Vita.

While the story is an attraction, there's no doubt that the star of the show is the gameplay. If you've played games like Final Fantasy Tactics, Tactics Ogre or Front Mission, you'll have the basic idea on how the strategy RPG genre plays. The gist is you move units across a grid-based map with the objective generally to destroy all the foes on the battlefield. Simple enough, but Nippon Ichi has implemented mechanics that newcomers need to be on the lookout for. At the start, you'll be fine through the earlier stages by using basic strategy know-how. If you aren't a person who is willing to learn the mechanics of the game, expect to be stuck grinding levels for a while.

Two distinctive elements make up the bulk of Disgaea 3. The first is the school based hub world where everything pre-battle takes place. In here are all your shops that let you buy new gear, items, heal your team and stash unnecessary clutter. It's also the gateway to battles by accessing the battle portal hosted by Mao's butler, and other key areas, such as the Item World and Classroom. Item World is a special place that allows players to jump into any weapon in the game and go through randomly generated dungeons. Anyone who manages to get to the tenth floor has a chance to opt out or continue on for another ten floors. Hitting the ten floor targets increases the power of the weapon, and with so many weapons in the game that all have unique stats, it's a paradise for any gamer who loves increasing numbers on their gear.

Battling is the other big element. Building on top of the common features of strategy RPGs, Disgaea 3 implements geo-cubes, an important gameplay mechanic that has been part of the series since the first game. Each map is normally filled with a selected amount of coloured grids. If one of these cubes occupies one of the coloured grids, all the same colours on the map will gain a status effect that is bound to the geo-cube. This could be double attack, 50% health decrease, warp - there's a tonne of different variations that can affect people who happen to be placed on these grids. Status effects can be stacked too, creating some really nasty situations that just seem unfair for anyone on the same colour.

Tactical skills don't just end with the geo-cubes. Units can also be grouped into teams in the Classroom area of the hub world – a place where you can also vote for (or demand with brute force if it goes wrong) favours from the school council, such as weaker enemies, more money, and better items in the shop. Throwing is also a big command. It allows units to pick up friends or foes and launch them from their current position. Team members can build up towers by stacking units on top of each other, making for hilarious tower attacks where four units come bashing down on an unexpected foe. There's just so much depth to the Disgaea series that I can easily say that this is the deepest strategy RPG franchise I've ever played. Is there any other game that lets you build characters to level 9999, and then reduce them to level 1 and let you build them back up again to be even stronger? Or let you deal out damage that goes past the billion mark? Thought not. There's just a massive amount of numbers involved. It may sound stupid, yet it blows my mind.

Fans already knew that though, and need no introduction as they know what to expect going into a Disgaea game, so apart from the new content, fans can also dabble with some of the shallow Vita features. The touch screen controls are used to zoom in the camera, move characters on the grid and flick random characters in the hub world, causing them to shake violently, sometimes causing them to move a little too… yeah, I said it was a bit pointless. I hated using the touch screen for moving units as it just didn't feel natural. A good quality about the Vita is its screen, and Disgaea 3's colours explode in loveliness all over the 5" beautiful display.

Given the state the Vita is in the moment, there's no denying that Disgaea 3: Absence of Detention is one of the best games to have on the system. It's got bucket loads of content that will give months of gameplay. The game is also charming, pumped with personality, has a likeable cast of characters and a quirkiness that only the Japanese can bring. Gamers who might not be the most experienced in the genre should be able to get a kick out of it if they are willing to take the time to learn, and this is as good as a place to start as any if you've never tasted the sweetness of the Disgaea games. Fans of the genre owe themselves to get this deep, complex and highly enjoyable strategy RPG. Disgaea 3: Absence of Detention is a welcomed addition to the Vita's game library that needs all the companions it can get right now.
Load Comments (0)