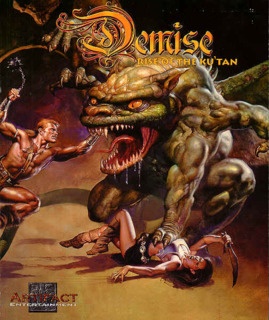 Demise: Rise of the Ku'Tan

User Rating: 8.5 | Demise: Rise of the Ku'Tan PC
By Celine_Aensland | Review Date: June 9, 2006
It's a dungeon crawler at it's heart - take a look at it's predecessor (Demise is also referred to as the The Dungeons of Dejenol 2 if I'm not mistaken) and you will see that it's basically a Rogue-like.

Some users (csf-60) can't even write a review properly - one does not rate a Rogue-like having spent less than 10 hours on it. I'd even go so far as to say, you don't have any business rating a Rogue-like without having spent a week at it.

As far as Rogue-likes go, Demise is average. Which translates to hard in casual gamer lingo. You're going to get your ass kicked if you don't pay attention to the details. It's fairly easy enough to jump right into it, but without an understanding of the strengths and weaknesses of the character races and classes you will quickly end up with a dead party, again and again. Demise is BRUTAL.

...which just adds to it's demented charm. Bone up on the stats like any good rules lawyer and you will see that it is prudent to build an all-brawn party with a thief to scout the terrain ahead and pick up loot to prepare for your REAL long-haul party.

Unfortunately I picked this up way early when it was buggy, and I never got around to re-trying it. Hopefully the next time around I can finally finish the dungeon. Bear in mind this brief romp which got me down as far as level 6 in the dungeon took me 2 months. Yes, that's right people, 2 friggin' months... just to get strong enough to reach the 6th floor. It's maddeningly tough, and the pain just keeps me coming back for more.
Load Comments (0)