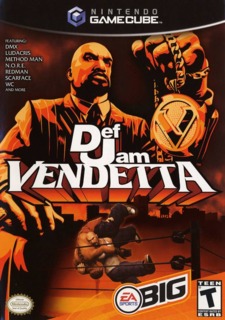 This game is no doubt the best game from it's time.

User Rating: 8.8 | Def Jam Vendetta GC
By Firedrag | Review Date: August 30, 2006
This game is no doubt the best game for the gamecube when it came out, but now better games have arrived. This game still holds up well in the gaming world.

The gameplay in Vendeeta has a few flaws, but overall, this is one great game. It is a wrestling style game, but much better than all of the WWE games. You take pick one out of something like 35 fighters and fighter other fighters. You can submit them, or you can pin them or use a special move that is called a Blaze.

The Audio gets a 10 out of 10. The music is so awesome. You listen to some of the best hip-hop rappers. Also the effects are very well done.

The graphica are decent, but they could be better. So if you have a Gamecube and want a fun fighting experience pick up Def Jam Vendetta, right now.
Load Comments (0)