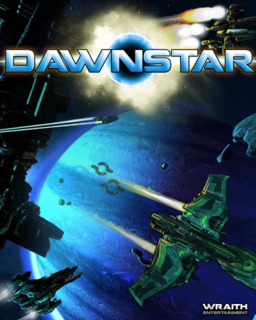 I might not have played much of this game, but only because it actively sabotaged all my attempts to do so...

Sure, it sounds promising. A space-sim in the vein of the classics, with stylish graphics and everything? Sound's like a blast from the past, doesn't it? Well, it might be, but I could never get far enough to check.

Actually, the game started on the right foot. The comic-style intro at the beginning was funny, the voice acting was surprisingly good and it got me pumped... and then BAM, the game throws you into the thick of it, without explaining the controls or any of the mechanics. Sure, your companion gives you a short rundown on the most basic controls, but he does so without any voice-acting and in a small text-box on the upper left, while you are right in the middle of a battle where you are being shot at from multiple directions. At first I was so disoriented that I didn't even notice that he was giving instructions until the end, so I thought I would look them up in the menu... But lo and behold, your only two options are "Main Menu" and "Exit Game", so I couldn't even do that or change my settings. This was the point I got the suspicion that this game might not be all that good. -.-

So, whatever, I went back to the main menu and looked up the most pressing controls, then restarted the game... only to realize that I still had the cursor on the screen during the battle. So yeah. I quit the game again, looked around the net (no info), considered using a cursor-hiding software, and then I suddenly remembered reading something about this in the controls, and it turns out that you actually have to use the "n" key by default to hide the mouse cursor. Why? Why can't the cursor disappear on its own when you are flying? Ah, also, the cursor hiding/un-hiding only works in the game itself, so when I went back to the main menu for the fourth time, I had no mouse pointer because I turned it off in the game beforehand, and the key didn't work in the main menu. Not fun.

Speaking of the cursor, it's presence actually made me realize why the game is almost unplayable with a keyboard&mouse setup: instead of direct mouse control, the ship just turns the way the cursor is at the moment compared to the middle of the screen. The farther it is, the faster it turns. This doesn't sound weird until you realize that this means that the ship doesn't react to your mouse input directly, which can lead to situations like the following:

In a dogfight, you follow after a ship on your left, so you jam your mouse to that direction. This makes your ship turn sharply to the left, and so you overshoot your target. Logic would dictate that you would just pull your mouse back to the right a little to compensate, but instead of your ship turning back, the game only registers that your mouse pointer is not "that" far from the center anymore, and so your ship just keeps turning left, except a little bit slower. Also, this would mean that your ship would essentially keep turning towards the left, even if you do not even touch the mouse, as long as the cursor was on the left side of the screen.

This is extremely counter-intuitive and makes your ships really hard to control, something that is the worst thing that could happen to a space-sim full of dog-fights, where sharp controls are everything.

Then there is the GUI, which is needlessly cluttered, an inventory system that doesn't let you drag things and lots of graphical and physics hiccups, like heavy freighters being blown away by small explosions like they were made of paper.

Oh, and before I forget it, I don't even know if you can save in this game at all. I had to restart the game a few times, but for some reason it always starts me out at the very beginning, but with all my money and equipment from my previous game... Weird.

So yeah, as I was saying, I don't actually know how good this game is, or how much better/worse it gets, since after an hour of messing around I realized that the game apparently didn't want me to play it, so I deleted my copy out of frustration. I think there might be something good here, as the graphics look stylish and the voice acting is surprisingly good, but I simply don't have the time to waste on a hard-to-control, glitchy game just to see whether or not it gets better with time.
Hell, I guess I will just go back to good ol' Freespace 2, I've heard the modders have done a great job reviving it, I might as well play a good game than this one.
Load Comments (0)