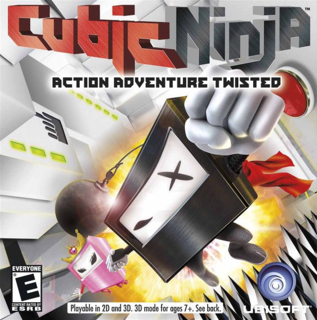 This game would make a great addition to anyone's 3ds library.

User Rating: 8 | Cubic Ninja 3DS
By Megadaman | Review Date: June 18, 2011
When I first went to purchase Cubic Ninja I was quite skeptical as to how good the game would actually be, considering the game received a 4.0 from Nintendo Power. I needed something to hold me over until Zelda though so I went and bought the game anyway, and man am I glad I did.
Cubic Ninja is kind of unique game containing elements of a puzzle and an action game. The idea behind the game is simple really, guide your cube character from the start of the level to the end. The game is made up of five different worlds, each containing their own different element, and each world is made up of 20 levels. Each world also has a boss battle at the end, each fight different and more challenging than the one before it.
The game starts off easy enough with the first half of world one acting more as a tutorial rather than actual levels. The game does get challenging enough earlier on though as I did die a few times in the first world. Each new world adds different enemies and obstacles that you must maneuver around in order to reach the exit in one piece. So when you finally master how to avoid one obstacle, the game throws something new at you.
The reason this game is so much fun is because of how you control your cube. There are two different options, you can either use motion controls or just use the circle pad. While the motion controls may make your adventure more difficult, they also make the game more exciting. With the motion controls you have to tilt the world around to control the cube. There are even many instances where you must put the cube up against the screen by tilting the 3DS above you. The circle pad works great as well and is also the only option you can use 3d in, but it takes away from the difficulty and excitement that comes with the motion controls.
Cubic Ninja has high replay value, with 8 different ninjas to complete all worlds with, you will be spending plenty of time in the story mode alone. Each ninja has a subtle difference, but it is enough so that the game does not really get repetitive. Every level also has a set time to beat, so you can spend plenty of time trying to beat the clock. Cubic Ninja also has a level creator mode. You can create any kind of level you desire using pieces unlocked from the story mode here. The only major flaw in this game is that you can only hold up to three levels at a time, and if you enjoy creating hectic levels like I do, I'm sure you agree a few more save spots would have been appreciated.
Overall, Cubic Ninja is a fun and exciting game, with the story mode taking me around 13 hours to beat (but I am a perfectionist). This game would be a good addition to anyone's 3DS, and let's face it, I am sure everyone's 3DS could use another addition.
Load Comments (0)