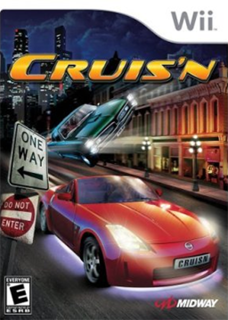 The shortness of the tracks and modes prevent this game from getting a decent score.

User Rating: 4 | Cruis'n WII
By SiMgUrL1721 | Review Date: July 14, 2011
There are about twelve tracks, and some of them are on easy, medium, or hard. It even says the difficulty level on each track. You can choose any car you want, and you can upgrade them with neon or full speed etc. As time goes on, you will earn more cash to buy more new and expensive cars. Since there are only twelve tracks to unlock, you'll most likely beat this game in one day. Also, this game has no online play which was a bummer to us. At least there is a two player mode.

The graphics in this game are barely passable for the Wii because cars look kind of blocky. I also forgot to mention that the frame rate constantly drops or freezes for a spit second every time you change a song. Sometimes you will also experience some long loading times when you begin a race.

Overall, this game is pretty fun to play, but the shortness of the tracks and modes prevent this game from getting a decent score. I wouldn't totally avoid playing Cruis'n. I would only recommend this game to racers who just want a simple, fast racing game. I also wouldn't recommend playing by yourself either.

Presentation - 2 The presentation falls flat because there's no story, and there aren't enough modes to play.

Graphics - 3 The graphics are barely passable on the Wii. You may experience some glitches or frame drops occasionally while playing this.

Sound - 6 The music is basically remixed hip-hop and techno music.

Game play - 7 Surprisingly the controls are responsive, and it's easy to pick up and play. They also have a tendency to flip out on you sometimes.

Lasting Approval - 2 Without online play, and only up to two players, you may become bored really quickly.