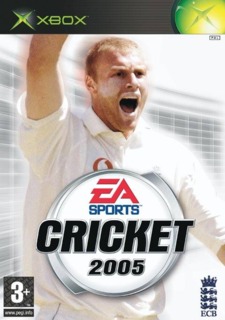 Better than its predecessor, this should be on the list for cricket fans but there could have been further improvements.

User Rating: 9.2 | Cricket 2005 PS2
By rohver | Review Date: December 2, 2005
EA is back this year worth another Cricket title and this time, there have been significant improvements. Some of these were quite expected and some not. Overall, the game is lot better than Cricket 2004 and if you enjoyed that, then you will enjoy this even more.

The major change from its predecessor, the graphics are top-notch. The player and umpire models are very detailed and distinct, unlike Cricket 2004 where each player looked like Sachin Tendulkar or Adam Gilchrist. The cricket fields look almost realistic and sometimes, depending on some weather conditions, there is a sort of haze effect too. However, ther could have been room for the crowd details. They still look like a group of cardboard cut-outs.

Gameplay has improved a lot too but that is not the true change. Minor tweaks can be found here and there which you will notice only if you have played Cricket 2004. The AI has been given a new set of animations. For instance, the AI fielder will not always throw the ball in the air and jump with joy after taking a catch. The batting has been made little difficult. This is because you cant see the ball marker which tells you where the ball is going to bounce until very late. Cricket 2004 had the ball marker right from the begining of the delivery, so you did not have to think about the shot selection too much. This is not the case now. You can also bowl each and every type of delivery in the cricket book using various combinations of buttons ranging from inswing, outswing, googly, and all others. All this does add to the gameplay but lets get to the bottom line. The AI has NOT been upgraded much and still is easy to manipulate. Elite players from the last installment can still turn every ball into a sixer.

Despite the EA tracks as in every EA game, the sound deserved more attention. The commentary is boring and there are hardly any changes. The ambient sounds are a nice touch and the crowd noise is good enough but the commentary makes the score drop down. You can hear the "knock knock" of the bat as the batsman gets ready to face a delivery on a soft, damp pitch as well as on hard pitches, for an example.

There are more additions to the match types. 20-20 format, tour mode, where you can choose from different tours such as the caribbean tour, the ashes tour, South African tour, and much more. The World cup, the world series and the knock out cup are there too. This game features a domestic mode where you can play domestic matches from Australia or England. All these do add a bit of variety to the game.

Overall, the game is good enough for Cricket fans and is quite fun if you have already played the previous ones.
Load Comments (0)