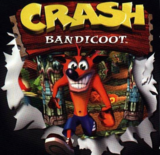 Overall it isn't as good as the Croc or Spyro games.

User Rating: 6.2 | Crash Bandicoot (Platinum) PS
By scorpionfish2 | Review Date: December 6, 2004
In Crash Bandicoot you play as a bandicoot called Crash and you must defeat the evil Dr Neo Cortex. The games spans 3 islands and there are two boss fights on each island. The game is a platformer but it definately isn't the best one around. The graphics and sound are good but it's a shame that the gameplay isn't the same. It's repetitive and just isn't that good. The enemies are varied but the bosses follow the same routine for the whole fight so it's easy to dodge them or their attacks. there are some secret levels to unlock and some levels are riding a wild boar through a village. Overall it isn't as good as the Croc or Spyro games.
Load Comments (0)