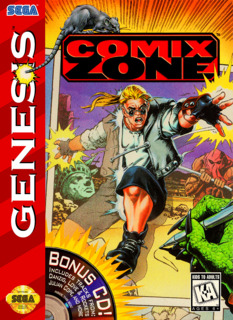 User Rating: 9.2 | Comix Zone GEN
By CLeRKSfan4life | Review Date: July 17, 2006
I first played Comix Zone just under 10 years ago when I was about 8 years old and I thought it was amazing. The controls were simple but provided extremly deep gameplay. The graphics were great for it's time, and while the game was challenging (and at times frustrating) I just couldn't put it down!

In Comix Zone you play Sketch Turner a writer and artist for comic books. The Bad Guy (can't remember his name) from these books comes to life and puts Sketch in to his own comic. If Sketch survives, the Bad Guy is defeated and returns to the comic books. If Sketch dies then the Bad Guy
becomes real and will take over the planet.

Comix Zone is a sidescroller that takes place in the comics and you jump from panel to panel and from page to page. You have to defeat many of Sketch's own creations as well as enemies created by the "bad guy" (still can't remember his name).

You have help from a woman who stays in a sort of command center and basically just tells you where to go and gives you hints on different puzzles. You also have a pet rat that can help by biting enemies.

Like I said, the controls are simple and fit perfectly with the Megadrive (Genesis) controller. The D-pad is for moving left and right and for crouching. The A button is used to jump with B for attacks and C to choose items from your inventory (which inludes, health, your rat, and explosives).

The graphics are a great part of the game. The characters are bright and detailed and they have very fluid animations. These mixed with the backgrounds provide a great atmosphere to the game and makes it seem like an actual interactive comic book.

Sound and music is also great in Comix Zone. The music is a mix between heavy metal and grunge (my two favourite genres). In fact some of the songs sound a lot like real songs ( eg: "come as you are" by Nirvana)
The sound effects are decent too with a fair amount of detailed voice samples thrown in. Punches, kicks and other sounds are well done too.

All parts of this game are pretty much perfect which makes for a pretty perfect game, which it is. It's very challenging in some parts but provides enough fun to make you keep playing. Definately one of the best games Megadrive has to offer!
Load Comments (0)