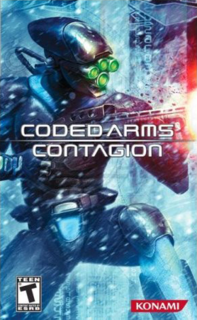 Great sequal, but it's an underrated game because people won't change the control scheme, read on to see what I mean.

The bad - The AI is clinically retarded, the story isn't good just like the other Coded Arms game, hard controls, no more randomly generated levels.

Now, I know I added controls and randomly generated levels on both good and bad. But it's true. The controls are easy to learn, but hard to use... Unless you use the right control scheme. I personally change the control scheme on ever shooter I have to have the "look" functionality on the nub and the move functionality on the face buttons. This provides easy movement and more accurate shooting. I mean, I played online just 15 minutes ago, came into a late game and won, with 20 kills and 8 deaths. (There was a little lag). The control scheme is the reason why people don't like PSP shooters, which is very unfortunate. Use my scheme and try it out.

But, the rest of the game. Like some PSP games, CD:C falls into the "great looking" games section. Because it just does. The animation is smooth, with the guns. And even though the AI is stupid, their animation is also good. As well, the ragdoll physics is always fun.

Chuck a nade under some guy's feet and watch him fly over the rail behind him and his gun fly into the wall next to him. It's nice.

Online is niiice, a few game modes though. But it could be overlooked. If you catch a lagfree or a game with little lag and a full room, it gets fast and intense. The guns have a bunch of variation.

The sound is good too... Yeah, sorry for the lack of EXTREME detail. But there isn't much detail to the game anyway. It's an awesome shooter, fast, quick, effective and very enjoyable (WITH THE RIGHT CONTROL SCHEME).

This game is a great improvement over Coded Arms, which wasn't too bad in the first place.

This game needs at LEAST a rent, but at the price of 30, I don't see why you wouldn't buy.
Load Comments (0)