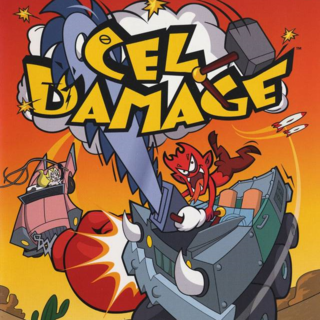 Cons: Characters usually only say 1 liners, Lacks story, not alot of maps, Not alot of characters to choose from, only 3 modes to play.

Even though this game has gotten a 5.7 from Gamespot, I think it should get a 6.5+. The game does have a couple of cons, but if you play with your little brother or sister, like I did, the game becomes even more fun. My sister and I played the game together and worked together to try to get all the characters unlocked. After we unlocked all the characters and such, the game became alittle boring. We still played it against each other but it didn't seem to have the same "feel" to it. It was nice to go around chopping people up with chainsaws or blowing them up with rockets.

Music: I really did like the music. It had a nice catchy tune to it and while playing a level or game, I would tap my foot to it or sing the beats or something like that. Even when my sister didn't turn off the Gamecube and the game was on the character select, I enjoyed listening to it. I think the music was one of the best parts.

Story: Eh. This bugged me alittle. The game had no actual story beside finishing 1st in every mode. It would have been nice to have a little story like if you finished with a character, maybe have a background or why they entered the contest, like they do in Twisted Metal.

Scenery: My second favorite. The cartoonish scenery was really great, and you could do a variety of things. Like you could get a rocket and fly to the top of a cliff and sit there, or fly up to a tree and wait. It also had a nice little animation when you fell in the river and got ate by piranhas or fell in the lava and burned to death. Or got crushed by falling rocks.

Multiplayer: My last favorite thing of this game. I had funny playing this with my little sister against all the computers and trying to win. It could have been even more fun if we had 4 players but I'm not complaining.

There could have been alot of stuff added to make this game better, but it is what it is. Don't expect a story, or loads of characters to choose from. The game isn't that long to complete but I did get frustrated from playing it. Espcially when I played Flag mode with my sister.

If you like a cartoon based game with a great muliplayer and great music, this games for you.
Load Comments (0)