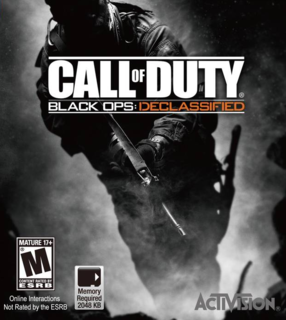 User Rating: 8.5 | Call of Duty: Black Ops Declassified VITA
By littlet0rtiab0y | Review Date: November 14, 2012
Call of duty. My first call of duty game was Big Red 1 on ps2. Playing that online was crazy, something un seen at the time. And soon came the later installments, me, picking up almost all of them for next gen. I enjoyed most of them, (really love the WW2 atmosphere). So just for a little bit of insight, im a pretty seasoned player.

I picked the game up yesterday, and let me just say this now because its the first thing i noticed and most people might not know.

--**THIS GAME COMES WITH A FREE REDEEM CODE FOR "CALL OF DUTY : ROADS TO VICTORY" IF YOU BUY THE PHYSICAL COPY--**

Okay with that aside, i have NOT played single player yet, and don't really have interest to. However, i have put a good 5-6 hours into multiplayer. Now my first impression was that well, quite frankly it was pretty damn good. As soon as the very first map loaded, all i could think about was how i was going to compare every little movement, sound effect, and animation to resistance. However, this turned out NOT to be the case. Everything felt like it fit into the mold of Call Of Duty.

Controls -
----------
Ive read a admin's review on a site, saying how he didn't like the auto run feature. Well, you can turn this off in the menu. What it is, is basically, if your character is allowed to sprint (since in COD you can't sprint forever) then it will automatically be done. The alternative and much more comfortable way of playing is the same way as resistance, which is to use the DOWN button on the D pad to sprint. I personally feel very comfortable with using the D-Pad. The one big issue i do have with controls are the implemented touch screen controls. In order to use a grenade or flash/equipment, you must click the icon to the right side of the screen to use it. After you touch it, you have the option of dragging it in the direction you want to throw it, or letting go instantly to throw it in that general direction. This means you MUST let go of one of the sticks, and i highly despise this. It makes it very frustrating to have to do all of that to aim a grenade when there are free buttons left on the D-PAD that could have been used. Otherwise, the controls are pretty solid. Its easy to pick up and play with 2 sticks to look and aim. The only other personal gripe i have with controls is there is no duck dive. I find it to be very helpful.

Animations are fair for the most part. Ive noticed a little bit of what i can best describe as giggling at some points. Best example being, on occasion when im laying prone waiting by a corner for a enemy to run past or something of that nature, my character who is laying prone on the floor completely still, will start to shake from side to side unnaturally. Just his whole body going side to side fairly fast. Everything else is pretty good. The running animation looks nice holding the various guns. Graphics are pretty pleasing however, some of the environments details can be pretty unattractive. One thing that bothers me is when you die in multiplayer. Its the same kinda thing as Resistance where you fall to the ground and everything goes from color to grey to black and you just kinda slowly fall an wait to respawn - and the worst thing after this happens THERES NO KILL CAM! This really bothers me. It might not sound like a big deal but it feels out of place, however i did get used to it and don't really notice it anymore.

The sound is probably the biggest negative of all the areas. There was even a patch the day after launch that was supposed to fix this, but i don't really notice a difference. In fact, thats kinda the problem, you don't really even HEAR anything. I mean, i think its just a bad case of your distance from where the various sounds are coming from, Gunfire/enemy or friendly units saying quotes, whatever it may be. It just seems off. But the other aspect is the ambient noise. I don't know, it just seems to quite sometimes. The sounds quality isnt the best either. Most of the sounds aren't from resistance, however some where carried over, such as grenade explosions and a few others. But there are some positives to dig out in the sound aspect. Its got the COD menu music we all know, and that catchy little DUN DUN DUN DUN DUN - DUN DUN guitar riff before each match to pump you up. These little bits make it feel less like a Resistance clone and much more like a independent COD game (Of corse it isn't just sounds that make that distinction.)

For me, the online gameplay feels right at home. It is EXTREMELY satisfying to get a headshot with the sniper, or to (as much as i hate using the touch screen to do it) get a tomahawk kill in the palm of your hands. It all feels fluid, the engine also feels good. It can have a hiccup here or there, but nothing to noticeable. The action is fast, for the most part the maps are a great size to accompany the 4v4 limit. When i first heard of 4v4 i was a little bit turned off by it. But once i saw how it worked for real, its really not to bad. Theres maybe a 2 second respwan timer, and remember theres no kill cams so its very quick spawns, and maps are all pretty tiny to. This means that theres never really a dull moment. Now, in the same light, if you get stuck with lousy team mates, well its going to hurt a little more then a normal COD game. Same goes for a really skilled player on the enemy team. Their skills can really be felt alot more...painfully. One thing i wanted to mention was "NukeHouse" which is nuketown, but CUT IN HALF. I really don't see the need for them to have done that. The map is still fun but it would have been better to have the real Nuketown. Alot of reviewers have complained about the connection quality, and i have had my small share of disconnects, but its nothing that is to terrible. Yes, there have been games where i felt i was doing personally great and then the game suddenly stops and loses connection, but its not often. I feel generous as well, because its Call Of Duty online in the palm of your hands. The aiming feels right where it should, and if you have played resistance its better then it was in that. Overall, pretty satisfying gun play.

The best and most honest way for me to put it is Call Of Duty done fairly well on the go. No, it may not have all the extras like Wager matches and Cod points to gamble or huge ground war matches, but, for the very first attempt to make a legit portable version of this franchise i would defiantly say its worth a purchase and its good fun in all. and yes i know there are DS and PSP handhelds but they simply and honestly we not as important as this one, as it has much better graphics, improved gameplay with 2 sticks, Wifi Multiplayer, and a generally pleasing feel of call of duty in your hands. After all is said and done, i give it an 8.5 with a recommendation to any call of duty, or FPS fan out there.
Load Comments (0)