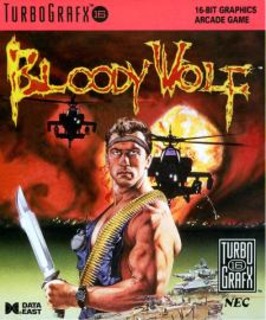 The president needs rescued ! Will you help?

This is an action game, your job is to rescue the president, will you do it? It's a translated Japanese game from what i have found and Data East makes it so just skip the story. The only thing you need to know is that you shoot the people that shoot you. If your looking to buy this for the VC please know there is no multi-player in this version. I think if they remade this they should add a oil stealing mission to be more up to date on the times. The style and feel are that of a Rambo movie. After awhile every action game starts to feel the same. This is a good game if you want to blow $6 (Virtual Console) or want to see what the TG-16 can do.

The graphics for this game are adequate. They look bright and colorful, not what you expect from a war game but i like the style. The animation is ok as well, this is an overall good looking game. The enemies flash when you hit them, so it is easy to tell when you have killed somebody. I wish the bodies would just pile up but they disappear. I guess your not really killing people as much as "injuring" them. You can play as either one of two people at the start. One is a like a big guy with brown and other other is wearing green. I do not remember what the characters names are, well you won't be playing them much to remember anyways. The weapons and explosions are also good, i have seen better but you get the idea.

The level design is pretty typical , most boards are setup the same, although you do have the occasional change. You often go back to a very similar spot that you played earlier in the game, it goes with the story but i would of liked to seen maybe one or two more locations.

There is one level where your making your way through the level jumping over trip wires, if you hit a wire that section of the ground goes away. Also a electronic security device blocks your way. In order to get past him you have to destroy him while avoiding the traps. Levels like these are fun but it reminded me way to much of the ninja turtle games. Also if I were to design a base what purpose would this serve? I mean not even your own guys could use the base. Well you are probably saying that the alarm went off , well i did not hear one so i guess this means this is how the base is layed out all the time ?

The sound and music are again pretty normal. Nothing is sticking with me much. The boss fight music is pretty good and pumping. The bass does not seem to be as much as in SNES which i am used to. This is the first TG-16 game that i have beaten so maybe i am just not picking up on the sound and music as much as i do with SNES.

I think a remake would be cool if the characters would call out taunts to the enemies, Often your taken on alot on screen i think a button where you could just taunt would be fun.

The control in this game is pretty well done. The character spins around fast. You can shoot diagonally, sometimes this can be a bit tricky. Alot of the bosses, the key to winning from what I have figured out is shooting diagonally at them while strafing back and forth. This is often a tricky thing to do. With the TG-16 you have the turbo fire button which is really a welcome touch. If you use it when you have the shotgun or other weapons u will run out of ammo fast. The shotgun usually only needs one hit to kill an enemy based on what type they are. It's easy to tell them apart, not only do they shoot different guns but each is colored really brightly.

Enemy intelligence is no where to be found. Each one can be counted on to do the same thing ever time. The green army men are so easy to kill and avoid that it just makes it a race to get the items and get to the bosses.

The game has a unlimited continue system which I love. As you get further in the game you reach checkpoints hidden to you but they are there. So if you die at that boss you will restart at the boss - minus some items. This makes the game easy to beat in a few hours compared to learning the game for days on end and spending 45 minutes getting back to where you lost last time.

The game does not have any multi-player. I would of liked to try out the multi-player as the arcade version has this. I am not sure why they did not put this into the game , crazy Japanese.

The jumping in the game is a bit odd as well. You can do a turbo jump which i don't recommend as you only get a few inches off the ground. You can also use the regular jump. you kind of float in the air like Lugi in Super Mario Brothers 2. At first i was like wow this is bad, but then you play and your glad you float like that makes the game alot easier. You can't shoot and jump at the same time which i hate as well. You don't really need to use the jump that much except in some boss battles. Even then if you jump it holds you up to being easier to shoot. For the Nintendo Wii Virtual Console you can't remap the controller so get ready to keep moving your finger back and forth between the a and y buttons and start button is your grenade ! They really need to add support to VC games to remap the controls.

The boss battles are the main focus of the game, there are a handful of them and you will play the same few bosses a couple times. There is a cool twist to this formula that people who had trouble at the first battle with this certain character will be happy to see. I am not the best gamer ever but I did not have much trouble in beating them. They are really easy once you figure out the pattern. The music makes it seem more intense and faster then it really is, so props to the music.

Well the game lasted me about 4 hours of game-play for $6.00 So on that end I am kinda bummed that it went by so fast. The game is great fun I am sure I will play through it again. There is not much else to do in the game. I guess one could see how far they could get on 1 continue. I am sure there are those that can beat it in one live. I wish there was multi-player that would add some to it. Overall I am happy i got to play it and even more excited that this one can be beaten. Most arcade ports only give you 3 continues and 3 rests. That always bugs me, it's a port of an arcade games and in most arcade games you just put a quarter in and kept going.

The name of the game bloody wolf is a bit weird i think changing it to something like Operation Wolf would be better. I did not see any wolves in the game when i was playing what a lie Data East.

- Super Shredder and Technodrome like levels
- No Multi-Player
- Short