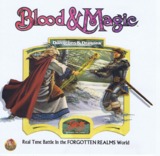 You'll feel proud of yourself after finishing this great and incredibly hard game.

User Rating: 8 | Blood & Magic PC
By ChristianKiss | Review Date: October 30, 2008
Blood and Magic (1995, Interplay and Tachyon Studios) is a Real-Time Strategy (RTS) game set in the Forgotten Realms campaign. Just to clarify, this one was the first Strategy game to use the Dungeons and Dragons license, not Dragonshard (2005).

You play as a wizard who controls a Bloodforge, some sort of a portal which must be used to create your basic units, the Basal Golems. Those guys, while standing still, assumes the form of an obelisk that constantly generate Mana for you. The Mana is one of the two resources you have in Blood and Magic, and it's widely used throughout the game. For instance, you use Mana to create more Basal Golems, structures and cast spells from several units. The other resource you have is the Experience, which is acquired mainly after killing enemy troops and buildings. With Experience you can (and must) research different types of units, naturally more powerful than the Basal Golems.

By now, you must be wondering why you would play Blood and Magic instead of Warcraft II or Command and Conquer, since so far there is nothing particularly interesting about this game. To be honest, if you can ignore its interface problems, Blood and Magic is one of the most intriguing RTS games ever developed.

Your Basal Golems don't exactly build structures, like the human peasant from Warcraft series. The Golems must be placed in special spots, called "foundations", in order to be transformed into one of the five buildings available. On most of the campaign maps you already start with a structure, but nothing is against if you decide to destroy it and build another one of your choice. For example, if you don't like the evil units from the Crypt, you can use the same foundation to establish a Temple to create Clerics, Furies or Paladins.

Not only your new structures need Basal Golems, but also the new units you're going to create. To do that, you must place a Basal Golem adjacently to the desired building and click on the "transform" button. Then you'll have the opportunity to choose between the available units, which you have at least one initial option for each structure. For instance, Barracks allows you to create Warriors, but after acquiring enough Experience, you can research the Ranger and he will become available at the Barracks as well.

Some units have special abilities, and it's impossible to finish Blood and Magic without using them. All the special skills cost Mana, except to the "Mana transfer" ability of the Basal Golems, of course. To illustrate: Clerics can heal wounded units, Gnomes can repair damaged structures (and eventually Stone Golems), Nymphs can cast Lure to persuade enemy creatures, Wraiths can use Fear in order to fright and separate units etc.

But those skills aren't the only things that differentiate creatures. You must consider movement type and speed, attack speed, damage and defense. For instance, Griffins are flying but slow units, which are extremely useful if you're going to make an assault against the opponents Basal Golems. The damage dealt is roughly like this: Attack minus Defense. However, some units can take advantage depending on the type of terrain they're fighting. You probably should consider letting a Ranger to fire arrows while standing still on a dense area of thorny plants, since most units cannot pass through that type of terrain without taking damage, while the Ranger does.

It's a bit difficult to talk about story in Blood and Magic. There're five campaigns, each one with three maps and a difficult. When you beat the first beginner's campaign, you unlock the next one, which the game considers as "intermediate", and so on. Naturally, the player will prefer to start with the tutorial, since the first campaign is already a little too harsh for newbies to learn the basics. When you choose a campaign, you'll have the choice to select the wizard you want to play. Basically, the difference between the two available mages is only the color: blue or red. You'll notice that the maps are exactly the same, and only changes your Bloodforge starting spot and your initial building (if there is one).

Most of your followers can carry items, which are found throughout the map. Sometimes these items are useful and perhaps even fundamental for your victory: some can give protection against evil or good units; others allow the creature to walk on water; healing potions make your units to last longer; the Storm Bracers give additional damage, and the list goes on. But I think the most important item is the Mana Orb, which disappear after been picked up, but instantly gives you a crucial Mana boost.

Each campaign has its own story, and it's completely apart from the others. The world is the same, but the avatars are different and there is no connection between them. If you want an advice, skip the cutscenes and go directly to the action, since those stories aren't intriguing in any way. For each map you'll receive the lose and win conditions, which are mostly about destroying the enemy's followers and structures while preventing him to do the same against you. But there're some variants too: destroy the opposite keep, or protect a village from the opponent (which will, of course, ultimately leads you to kill him).

Nevertheless, to accomplish those simple objectives you'll need to take your time and prepare yourself for a harsh experience. First of all, you start all the maps with a substantially negative handicap (which increases over time). While your adversary already comes with trained soldiers, you must rely only on your Basal Golems. And when you actually begin with some useful combat units, your opponent has much more. Also, even after beating the majority of your enemy units, you'll notice that he will re-create everything too *****ing fast. Even after killing all the Basal Golems of your adversary, you'll notice that he's still creating more and more from the Bloodforge. Naturally, your Mana is increased periodically, but at a very low rate, meaning that it's impossible to reproduce what the Artificial Intelligence (AI) manages to do.

If the apparently cheater AI wasn't enough, the controls in Blood and Magic are a bit difficult to get used to. Using your Basal Golems to transfer the so necessary Mana is very cumbersome. You must cycle between ALL your Basal Golems and click in the "Transfer" button. To speed things up, you can use the right mouse button or the "S" key, but you still need to select each Golem individually. Fortunately, after charging the maximum amount of Mana, the Golems automatically transfer it to your reserve, but you can't always wait for that to happen.

Worse than managing your Basal Golems is to order five or more units to move simultaneously. As most RTS games, you can select a group of units by dragging a box around them, and Blood and Magic also features that option. The problem is with the pathfinding of your creatures, which was horribly done. You can bet that, after issuing an order to move several units together, only one or two will reach the destination at a reasonable time.

So, both the given handicap and the gameplay mechanics are against you, but what makes Blood and Magic so hard is the strategy itself. Each map you have to use the proper units against your enemy. For instance, Wraiths can kick *** of most of the strongest creatures, but it's completely useless against Paladins. And, as I said above, you must consider the terrain you're fighting, unit skills and the gathering of Mana. All of those aspects must work flawlessly at the same time, otherwise you're finished. After the second campaign, you probably had already mastered the most important things in this game, therefore making the gameplay much more rewarding.

Blood and Magic doesn't end with the regular campaigns. After finishing those, you unlock the Legendary Campaign, which is where the real fun begins. Now you can choose your color and personalize your avatar, and as far as I could understand, if you personalize a bizarre wizard, he or she will receive a proper alignment. Since I played with a "good looking" dude, the game set my alignment to Lawful Good. The Legendary Campaign grossly repeats the maps of the regular game, but that isn't a bad thing since the maps are mostly well done. I found the last Legendary map (the only one that actually differs from the original campaign) the most difficult one in any RTS game, and it's very... captivating.

If the single player isn't enough, there is a two-player mode available as well, which plays much like the solo mode. The connection works fine, but you'll surely miss a support for more players.

Despite its interface problems, Blood and Magic is a quality game. The graphics are OK and the sound is just great, although you'll probably get ****ed with some sound effects, such as the transferring Mana from Basal Golems or the using of the Heal spell. Nonetheless, I didn't experienced (or noticed) any major bugs in the entire game, although I was playing the already patched version (1.01).

Blood and Magic was developed for hardcore RTS gamers, and undeniably isn't for newcomers in this genre. Maybe that was the reason that this title wasn't a success, or perhaps it's about the game mechanics, which is very difficult to get used to. Anyway, if you're after a deep and tactical game, Blood and Magic may gratify you with dozens of hours of challenging gameplay.
Load Comments (0)