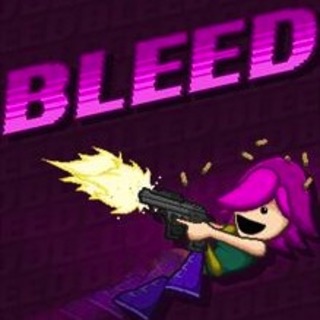 Even with its small scope, Bleed manages to consistently surprise and impress...

User Rating: 8 | Bleed PC
By WTA2k5 | Review Date: July 6, 2013
The twin-stick shooter is perhaps the only genre whose core gameplay and control functions are wholly and perfectly summed up by the name of the genre itself. Unlike the nebulous moniker of the action-adventure genre, for example, whose releases could pull you in any number of directions (though, at this point, most likely towards the nearest chest-high wall) when you buy a twin-stick shooter, you're pretty much guaranteed to spend the next few hours using two analog sticks to shoot things. But despite the fact that a genre's central mechanics are simple enough to be entirely detailed by the name of said genre, the twin-stick shooter has proven to be quite a reliable source of entertainment for those seeking twitchy, frenetic thrills.

A number of titles belonging to the genre are even distinctly superb, such as the bright, ceaselessly riotous Geometry Wars 2, or the conversely dark, brutal Binding of Isaac. Bleed, a one-man indie project and recent Greenlight honoree, is the next in that terrific lineage.

Bleed, unlike many games of its ilk, is locked in a side-scrolling perspective, which is fitting indeed given the game's heavy emphasis integrating tricky platforming into its gleeful bullet-hell run-n-gun action. Wryn, the game's wannabe hero protagonist, can perform three lengthy jumps in a row that can be aimed in any direction you'd like, allowing for the mobility and flexibility you'll undoubtedly need when deadly projectiles are being hurled around every which way. Add in a slick bullet time mechanic, and the young lady is capable of pulling off some truly badass stunts that would put Max Payne thoroughly to shame.

The level design that houses all this terrific action is impeccable, allowing for not only a wide visual variety, but some truly novel gameplay conceits. One stage, for example, has you sneaking through a cyberpunk highrise, dodging trip wires while taking out security drones, forcing you to play at a much more measured pace than usual. Another has you running along the top of a high-speed train, gaining as much ground as possible before having to duck down and avoid slamming into an incoming tunnel.

As you might imagine, the balancing act of navigating trap-laden environments while facing down an onslaught of enemies can yield quite a challenge - especially when considering the fact that the game features over a dozen inventive boss battles that require your aim to be even more dead-on and your multi-tiered dodge maneuvers to be even more complex and accurate. But one of Bleed's greatest strengths is that its huge swath of gameplay and difficulty options ensure that it's one of the most immediately accessible experiences in the bullet-hell genre. There are four difficulty settings that allow for an experience to be as breezy and casual or unforgiving as you'd like, and the additional option to play through the game's seven stages with only one life adds an even more hardcore play option for the especially daring.

There's plenty more to rave about with Bleed. There are a few unlockable characters that have significant effects on core gameplay, there's an insane boss duel mode that let's you fight three bosses at the same time, and the story, though largely sparse and infantile, comes to a surprisingly earnest conclusion. With a five dollar price tag and a ninety-minute story mode, Bleed might seem a rather humble game on the surface. But the game is a clear labor of love that manages to consistently surprise and impress despite its small scope.
Load Comments (0)