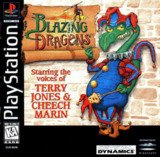 I wish I have never played this game.

User Rating: 1 | Blazing Dragons PS
By CorruptOwl | Review Date: June 28, 2010
Hello, everyone! It's been ages since my first review, but now, at last, I'm back to review for the second time, this time on a game that I wish was never released. That game is Blazing Dragons. I see some people think this game is okay, but I am here to explain today why I hate this game.

My first gripe is the graphics. They look like graphics you'd see in some old PC game or perhaps a SNES game. Meaning that, they are far behind their time. Framerate is shoddy and the talking animations seem to be out of sync with the voices. What does that mean? It looks like 16Bit game graphics, not graphics in a PSX game. This is a 32Bit console you put this game on, Crystal Dynamics, not a 16Bit console, if you were intending to put it on a 16Bit console!

Now to the gameplay. You think by the game title it's going to be a fighting game or flying combat game, like what I thought before I bought the game. Well, it's not. It says "Adventure" here but I'd say it's a 2D point-and-click.
This is also, in my opinion, a boring and frustrating game you can actually fall asleep to while playing. You have absolutely no idea what to do at all and it can take WEEKS just to make even a small bit of progress. I can not, never have and will never even will try to get past the part you have to wash dishes. Yes, that part! The part at practically the very beginning of the game. I never was able to get past it, ever. Seriously.

The music of the game is probably the most forgettable part. None of the tunes are memorable to me at all.

Bottom line, Blazing Dragons is another one of those games that should have never been, period. If I am ever to remember this game as anything, it will be "as the game that was created by the people behind the Gex series, and nothing more than a pile of scrapings from the bottom of the barrel".
Load Comments (0)