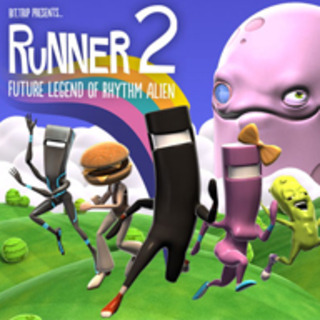 It's hard to put Runner2 down once you are trapped in its trance and find yourself "in the zone."

User Rating: 8 | Bit.Trip Presents...Runner2: Future Legend of Rhythm Alien WIIU
By Domstercool | Review Date: August 19, 2013
Runner games have become extremely popular on mobile platforms, normally going for free but incorporating some kind of in-app purchasing as a way to get money from people addicted to the game. Looking at the PC platform, runner games aren't exactly a thriving genre, unless you want to count the flash games you can play through your browser. I'm talking about purchasable titles, though, such as the recently-released BIT.TRIP Presents… Runner2: Future Legend of Rhythm Alien, which I'm just going to shorten to Runner2 because that title is extraordinarily lengthy. Runner2 is a game that sells for £11.99 on Steam, but the thing with Runner2 is that while the game might seem like a fancy runner game from the outside – no doubt people are screaming at the price because of this misjudgement – when you sit down and play the game, you find out it is so much more and is easily the shining example of how to grow the genre into something much more exciting.

If you follow independent game development then you might have heard of Gaijin Games and their BIT.TRIP series, which included six games that were originally released for WiiWare, with four of those titles also making their way to Steam after their initial console release. Runner2 is a direct sequel to BIT.TRIP RUNNER and follows on from where CommanderVideo left off from the first title. He now finds himself sucked into an unknown dimension and he must carry on doing what he does best – running right.

The premise remains intact from the first game: You play as the forever-running CommanderVideo, with the only control you have over him being to help him athletically avoid obstacles, pick up gold bars, block objects and do kung-fu kicks into some enemy's face, all while adding chimes to the musical score. It's easy to forget that this is a rhythm game, but after working your way through the friendly introduction levels to learn the mechanics, you will find yourself creating music with your slides, jumps and dodges like you were the next Beethoven – okay, maybe not that impressive, but the game manages to use music to make the player get into rhythm that allows the beat to play out within their head. It's amazing how it keeps you focused, as I found myself having better timing on the next obstacles as if my body was instinctively pressing the right buttons at the right time. I wasn't creating music, but predicting the song's next beat.

Music is a showpiece for the game, initially beginning with quiet and missing instruments or beats, but if you collect the health symbols that are located in each stage, then the music crescendos into a full song. Manage to get them all and you gain a sense of accomplishment – a feel-good vibe – as you play along to the upbeat tune. Gone is the retro, 8-bit chiptune score that was a huge part of the first game's aesthetic appeal. Instead, Runner2 has gone for a modern approach in both music and graphic design. The game visually looks great and gives off a sense of warmth and welcome with its bright colour palette and cutely portrayed characters. The sequel is now completely made from 3D models, with little animations in the background environment that add that magical touch. For fans of the original's old-school retro look, there are some levels hidden away in the game that I'm sure you will fully appreciate.

While the start eases itself to allow the player to grasp the concept of the gameplay, this does not mean that the game is a walk in the park. It's not long till you are faced with some challenging levels and a test of one's reaction time. One touch of an enemy, a mistimed jump or a crash into a wall will cause CommanderVideo to return to the start of the level to try again. Thankfully, Gaijin Games have improved the level design by adding checkpoints that can be crossed during a stage. These are optional, as you are free to jump over the checkpoint banner and net yourself a tasty 50,000 point bonus if you feel that you can take on the level without dying. Activating the checkpoint means that if you die, you are allowed to retry with the amount of score you had gathered at the moment of hitting the checkpoint. Gaijin Games seem to be making sure that everyone is comfortable playing Runner2, as it features three difficulty settings that you can change on the game's world map at any time, so if any of the 100-plus levels are giving you a bit of a headache, you can tone them down to help you progress.

Hardcore players have lots to play for in Runner2, as there are online leaderboards for each of the game's stages. To be the best, you will need to use advanced mechanics like the dance move, which rewards the player bonus points if they manage to pull a move off. You can't do anything while the dance is happening, so it is all about activating it at the right time to make sure you don't accidentally dance into death. Getting a perfect run in a stage is also a must as this will offer additional points, but this requires the player to get all the gold pieces and all the health packs. Also, you are rewarded with a target bonus of up to 10,000 points for getting a perfect run, as CommanderVideo jumps into a cannon after crossing the finish line, leaving it up to the player to stop the movement of the cannon at the right angle to hit a bullseye on the target board.

Additionally, a few stages in the game have split paths, often having an easier route and a harder route, in which the harder route will offer a reward of some kind. This can range from unlocking bonus levels, gaining additional characters or costumes, or being more challenging and offering more ways to gain a higher score than the safe route. It's a clever design choice that, along with the difficulty settings outside of the level, allows players to pick the challenge themselves, giving novice players who just want to play the game a chance to finish it while allowing the hardcore player to show off their skill and beat the tougher sections.

It's hard to put Runner2 down once you are trapped in its trance and find yourself "in the zone," hitting buttons in succession as if you are playing a piano rhythmically to your favourite piece of music. Runner2 is a simple title to explain, but a great game to experience. It manages to blend rhythmic platforming with the runner genre tremendously well, creating a cocktail of pure enjoyment from start to finish, and is accessible enough that anyone can get into. You don't have to be a fan of music games or a fan of endless runners to enjoy this. On that note, I urge that if you are at all slightly interested, then you should check it out and relish in the musical pleasure and its imaginative creativity.
Load Comments (0)
Where to buy
Bit.Trip Presents...Runner2: Future Legend of Rhythm Alien
There are no available deals for this platform
$33.98 at Walmart
GameSpot may get a commission from retail offers.