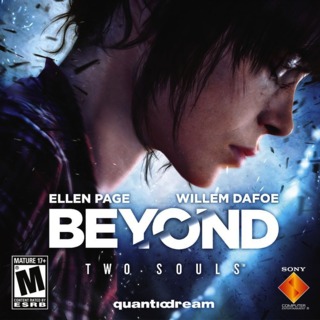 A disappointing entry for Quantic Dream after "Heavy Rain."

David Cage and Quantic Dream helped pioneer the "interactive movie" genre with "Heavy Rain," a game that, to this day, I still absolutely love in spite of its glaringly obvious flaws. Three years after the interactive murder mystery drama took the world by storm (to an extent), Quantic Dream returned to the spotlight with "Beyond: Two Souls" and, well, the "tough act to follow" trope really kicked in with this one.

Off the bat, "Beyond" has quite a few things to like: headlined by big-name actors Ellen Page and Willem Dafoe, the game is beautifully acted, visually superb, and has a killer soundtrack. On the surface, at least, it looks like you're getting ready for a good time, right?

Well, not necessarily. See, the gameplay of "Beyond" follows the same formula as "Heavy Rain," except the Quick Time Events (QTEs) are much slower and the mechanic of controlling Aiden is EXTREMELY sloppy. And because you're watching quite a bit of the game and not really playing as much, it kind of feels like it's lacking in interactivity. Considering that the game is an "interactive movie," the way that you interact with the game should feel more meaningful and purposeful, but unfortunately, it just doesn't. The story is also an absolute mess that has no idea where it wants to go next and what it ultimately wants to be, and while the acting is excellent, the characters the actors play are not very interesting or well-developed. Doesn't help that the game is told in an extremely jumbled way, where you jump between random points in time with no explanation given as to why the game chose to tell the story this way (granted, that was fixed for the PlayStation 4 version, but at the very least, us PlayStation 3 owners could've at least gotten it as a New Game+ or something).

As a whole, I'm not too sure what to make of "Beyond: Two Souls." When the game does right, it REALLY does right. When the game does wrong, however, it REALLY does wrong. It definitely has its great moments, and it definitely has its bad moments. I think I can safely say that the game isn't BAD: it's functional, and of course it has its flashes of excellence, but the game should've been far better. All told, if your curiosity is piqued, give the game a shot on the PlayStation 4. If you're more skeptical, you may want to skip it. Playing this game also taught me a valuable lesson: don't set unrealistically high expectations. I did, and I walked away disappointed. So, in general, if this is a game you are really interested in playing, go in with your expectations lowered. Maybe you'll end up having a better time than I did.