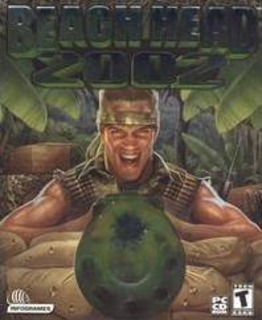 4.1
Poor Check out the review

This isn't a great game, but it doesn't try to be. It does a great job at being simple.

User Rating: 7 | Beach Head 2002 PC
By scringuy | Review Date: February 19, 2009
This is a good massacre game. I'm not sure what to say about the graphics, because I don't know when it came out, but they would probably be good a while ago. Diagonal textures up close look like small staircases, but you can see unit details from some distance away.With the tank explosions, the turret comes off and goes maybe 10 feet into the air, then disappears into the ground, leaving a scorch mark but no hole on the top of the bottom of the tank. APC and aircraft explosions, however, look like you just blew up a bunch of black planks that loosely resemble outside parts of whatever you just blew up. I don't get the weapon selection, also. There's an anti-tank gun, An M60, a double-barreled anti-aircraft gun, and a minigun. The M60 and the minigun both have almost or the same rates of fire, but the minigun may be slightly more powerful. Problem is, you can only have one M60, anti-aircraft gun, or minigun in any one level, even though they said in the manual that the anti-aircraft gun and the minigun are good for shooting planes and the M60 is less effective, like you can choose, you're stuck with the M60 most of the time, even with planes and helicopters everywhere. You also have a cannon for tanks and APCs(one-hit kills with the cannon), and it's also good against troop clusters. The missiles are probably the best weapons overall. They're as powerful as the cannon on the ground, and good against troop clusters, too. They're also supposed to seek, which works well with aircraft, but only sometimes with ground targets.
Load Comments (0)