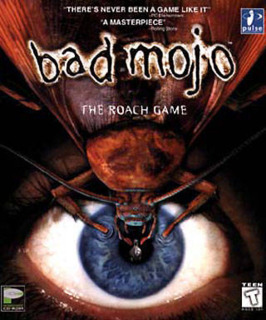 eight years later and its still full of bugs.

User Rating: 6.5 | Bad Mojo: Redux PC
By t3hJoE | Review Date: December 28, 2004
In Bad Mojo you play as a mad scientist transformed into a cockroach. The story is remniscent of Kafka's metamorphosis. You must continue through the game to figure out why you were turned into a cockroach and how to become human again.. The game is like myst in that you're dumped into the situation and have to figure out what to do with few hints and no prompts. Back in '96 when this game was originally released it was unique and interesting. The gameplay is still pretty good but its filled with bugs and glitches, the full screen video option does not work. If you enter the main menu and resume the game half the time your roach will be sent to the right of the screen sometimes putting him in spider webs and other such traps. On occasion the directional keys would get messed up, you could fix this however by going to the main menu of course this caused the aforementioned glitch. Considering bad mojo has been around for as long as it has the should be NO problems whatsoever. Its the exact same game it was 8 years ago. The graphics and sound are incredibly lack luster by todays standards. Unless your dieing to play another puzzle solver let this one go.
Load Comments (0)