Zorro to leave his mark on Wii

Masked man being brought to Nintendo's latest console by Pronto Games; Destiny of Zorro due for Christmas release.

A news post on the Web site of Zorro Productions has revealed that a Wii game based on the masked defender of justice is on track for release later this year.

While the company didn't reveal much about The Destiny of Zorro, it did say it was being developed by Pronto Games. Pronto's previous games include Dungeons & Dragons Eye of the Beholder for the Game Boy Advance and National Treasure Puzzle Quest for mobile phones.

According to the site, Pronto's approach to game design is to make it fast, fun, and small. For Zorro specifically, the studio is looking for something instantly engaging. It claims, "The game is easy to understand, with challenges for casual gamers but with an interest level that will attract hard core gamers, too." 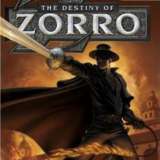 View Comments (171)
The Destiny of Zorro