Zoids Versus sequel coming to GameCube

The third release in action game series will likely arrive sometime before March 2005.

Japanese toy and game manufacturer Tomy will be releasing its third installment in the Zoids Versus action game series once again on the GameCube, tentatively titled Zoids Versus III. No specific details on the game have been revealed, nor has a release date been specified. However, considering that it is on Nintendo’s upcoming third-party title calendar, it will likely arrive before Nintendo's fiscal year ends in March 2005. 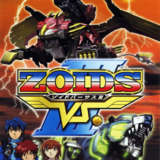