Konami has just announced the follow-up to its 2003 GBA card-battling game Yu-Gi-Oh! The Sacred Cards.

Hot on the heels of the November 2003 release of Yu-Gi-Oh! The Sacred Cards for the Game Boy Advance in the US, Konami is developing a sequel, called Yu-Gi-Oh! Reshef of Destruction.

Like most of the Yu-Gi-Oh! games already on the market, Reshef of Destruction will focus on a collectible card game where you'll build a playing deck and play against computer-controlled duelists. In this particular game, you'll be working your way through more than 100 duelists, with the ultimate goal of building an incredibly powerful deck, which you'll use to battle Reshef, also known as "The Dark Being," who has the intention of destroying the entire world.

Sweetening the pot for those who also play the real-life Yu-Gi-Oh! collectible card game, Reshef of Destruction will come packaged with three exclusive limited-edition cards, which will be the Dark Magician Knight, Knight's Title, and Sage's Stone. Yu-Gi-Oh! Reshef of Destruction is currently set for a June 2004 release on the Game Boy Advance in the US. 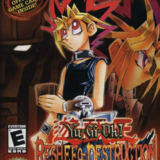