Konami of America announces that it has shipped its TV-show-inspired puzzle game for the GBA to stores across North America.

Konami of America has today shipped Yu-Gi-Oh! Dungeon Dice Monsters for the Game Boy Advance to stores across North America. The game is based on the dice game played by the characters in the popular Yu-Gi-Oh! animated TV series, and it features more than 80 different characters from the show.

In the game, players must enter more than a dozen different tournaments where duelists gather to create dungeons, set traps, use magic, and summon more than 100 different monsters in order to defeat their opponents. In addition to the single-player game, Dungeon Dice Monsters allows players to go head-to-head with their own dice collections using a link cable. 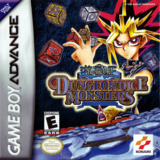