Yu-Gi-Oh! gets its annual world championship update, and we check out the new role-playing game.

As long as the card game is still popular, Konami will continue to release Yu-Gi-Oh! World Championship games each year so that players from all over the world can duel against one another, thanks to the Wi-Fi capabilities of the Nintendo DS. We were able to get a brief look at the game during Konami's press event last week in San Francisco. The 2009 version boasts an all-new role-playing game based on the animated 5D's series, which launched on the 4Kids network last September. Characters from the new series will make an appearance in the game, where you play as a young man who has lost his memories.

This game is tailored toward hardcore fans of the Yu-Gi-Oh! card game, because it assumes that you know how to play. You play as a young man who wakes up in a shady part of town, without any idea who he is or why he's there. You immediately encounter a friendly and very girly looking boy, who tries to help you by challenging you to a duel. Card games are tricky to learn via a tutorial on a DS, but if you are already familiar with the latest cards and how the phases work, then having it all laid out for you on the DS will be straightforward.

Gameplay for the most part involves exploring your surroundings and dueling others who challenge you. We were told that you have a duel runner motorcycle to race with, and there will be times when you need to go into stealth mode to avoid detection. These gameplay elements are meant to add to the overall experience, so you aren't limited to playing cards. As you win duels, you'll be able to upgrade your mode of transport as well as earn new cards. With the money that you earn, you can also buy cards to add to your deck. There are 2,800 cards in the game, including the latest set, Crimson Crisis. Some other new additions worth noting include added 3D effects as well as flashy cinematic sequences when you summon a beast into play.

When you're ready to get serious and play the traditional card game of Yu-Gi-Oh!, the World Championship mode is where you can go online and play ranked matches (with friend codes of course.) Each year Konami hosts a national tournament, and you can register at its Web site to try to earn a seat. Only 256 players are chosen, and they compete online using their copy of the game. The top four players are invited to San Diego Comic Con to compete, and the two finalists will go to Japan for the World Championships. Yu-Gi-Oh! 5D's Stardust Accelerator: World Championship 2009 is set to be released on May 19 in preparation for the annual tournament. 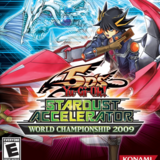