We pick up our swords and test out the PSP version of Ys.

Ys: The Ark of Napishtim for the PSP is a handheld version of the Ys game released on the PlayStation 2 earlier this year. Besides shrinking the adventure down for the small screen, the PSP version sports a number of minigames that are unique to this particular installment. We spent some time with the game at Konami's press event to see how the port is treating this entry in the classic franchise.

The main narrative and events in Ark of Napishtim, and the game's original look and feel, are wholly untouched in this new version. The red-haired swordsman, Adol Christin, is marooned on a remote archipelago, cut off from the rest of the known world by the Great Vortex. He's rescued and nursed back to health by two priestesses from a beast-man race known as the Rehda. Humans (or Eresians, as they're also known) are held in great suspicion by the Rehda, partially because humans keep rolling up on their beaches and then setting up shop in their ancient, holy ruins. Adol sets out to find a way home, winning friends and admirers with his heroic acts along the way.

Graphically, as mentioned, the game is virtually identical to its PS2 cousin. If anything, the characters themselves look a bit sharper and more detailed, and we were told that the development team was using the sprites from the PC version of the game (which was not released outside of Japan). The colors used and the various areas we visited were bright and crisp on the PSP screen, though the game itself apparently hasn't been fully optimized yet. The developers plan to continue improvements with load times and such, which were a tad long when shifting between certain areas. Putting aside the whole "not done" thing, Ys seems to have made the move to the smaller system well.

The new element in this version is the addition of minigames, which will span a variety of different types. You can unlock them in the main game and then access them from the main menu. We were able to try out three different sorts of minigames. The first was a mission to save villagers who were walking across a long cave. Monsters were mixed in with the civilians, though they looked like normal people. They would flash their true shape, and we had to kill them before they reached the other side, without killing the innocent people. The second game was a timed obstacle course, where we had to jump across a number of platforms and reach a crystal. This game started off simply, but soon things were being thrown at us, like flying enemies, to trip us up. The third game was a scavenger hunt, where there was a limited time to dig up items covered with sand on a beach. It was a memory game, and the item locations were revealed just before the search. Items also sometimes flashed when Adol was nearby, which let you ferret out the items more easily. We don't know how many such minigames are included, but it looks like they could be a nice occasional diversion.

Ys: The Ark of Napishtim is currently slated for the spring of 2006, with further additions and more content due to be added. We'll keep you up to date on any developments as they arise, so be sure to watch this gamespace for more news from the land of Ys. 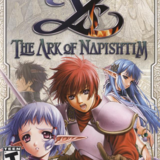