Doing so serves a real purpose.

Frog Fractions 2 is, unbelievably, now available. And it turns out that it allows you to import your save file from Mass Effect 2.

As seen in the images below from Twitter user dogrunes, "Import Mass Effect 2 Save" is an option that can found in-game. Doing so initially yields a message that welcomes you back using your Mass Effect character's name, but it seemingly offers no further reason for doing so.

YOU CAN IMPORT A MASS EFFECT 2 SAVE IN FROG FRACTIONS 2 WHAT THE HELL LMAO pic.twitter.com/my1dedhsf8

In fact, Frog Fractions 2 includes a puzzle that requires the use of different Mass Effect 2 saves, according to what developer Jim Crawford told Polygon. He didn't share any further details on what form that puzzle takes, which should come as no surprise considering the lengths to which he has gone to keep Frog Fraction 2's precise existence a secret.

The game was recently discovered hidden inside another, unrelated game that launched on Steam earlier this month. This comes after a lengthy search that began following a Kickstarter campaign for a Frog Fractions sequel in early 2014. 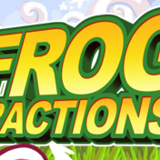