Warner Bros. and Little Orbit bringing action role-playing game based on Cartoon Network TV series to Xbox 360, PS3, Wii, and DS during beginning of next year.

Warner Bros. is digging into its DC Comics license again, this time granting Little Orbit publishing rights for a game based on the Young Justice cartoon series for the Xbox 360, PlayStation 3, Wii, and DS.

Due out in 2013, Young Justice: Legacy will be an action role-playing game that is set between the events of seasons 1 and 2 of the animated television series Young Justice. The game is being written with the help of show scribes Greg Weisman and Brandon Vietti.

The game's announcement did not note which character(s) from the television show players will be controlling or what villains players will face. Some DC Comics characters from Young Justice are Robin, Aqualad, Kid Flash, Superboy, Miss Martian, and Artemis.

A website for the title is presently live, and it indicates gamers will be able to control 12 different playable characters and take on 12 villains. The game also sports online and local multiplayer modes, though no mention was made as to how these game types will operate. 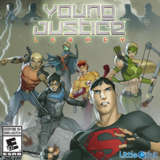