Nintendo has today announced the development of Yoshi's Touch & Go (working title) for the DS. Played using the DS stylus, the game will require players to help Yoshi guard Baby Mario as the pair of them negotiate both vertical-action and horizontal side-scrolling levels. On the vertical levels, players will have to draw clouds on the touch screen that will protect Baby Mario from enemies and lead him to Yoshi. On the horizontal levels, players will use the stylus to look out for Yoshi as he gallops through the countryside.

Yoshi's Touch & Go will feature wireless play for two players, but it's not yet clear what form the multiplayer gameplay will take. Stay tuned for more information on Yoshi's Touch & Go as we continue to report from Nintendo's Gamer's Summit. 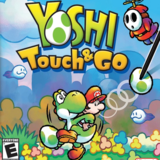