Yoshi's Story is a derivative, simplistic platform-jumper that's so easy some toddlers out there could probably beat it in a single sitting.

If you download Yoshi's Story from the Virtual Console shop assuming that it's the Nintendo 64 equivalent of Yoshi's Island, you're in for the mother of all disappointments. Sure, Yoshi can eat enemies and hurl eggs like he did in Yoshi's Island. And yes, the side-scrolling environments occasionally pull off a handcrafted look that some people might deem charming. However, beyond those similarities, Yoshi's Story is lacking all of the creativity, depth, and challenge that were abundant in Yoshi's earlier adventures.

The story unfolds like a chapter in a children's book, with goofy pop-up decorations and simple dialogue filling you in on a tale that basically involves a group of baby dinosaurs hunting down the crook that stole their missing Super Happy Tree. Playing as one of those dwarfish dinos, your job in each level is to find and eat 30 pieces of fruit. To do so, you'll jump over pits, use Yoshi's tongue like a grappling hook, and manhandle enemies by eating or butt-stomping them. The graphics and audio don't come close to pushing the N64's limits. But you'll probably appreciate the cheery music, as well as the way the game juxtaposes computer-rendered characters with a mixture of hand-drawn and clothlike backgrounds.

Unfortunately, after you play for a couple of minutes, you'll discover that there's not much substance here. A couple of levels feature fun springboard and swimming sections, but the majority of the levels just repeatedly rehash the same straightforward gaps, enemy encounters, or puzzles. Yoshi can gobble up enemies and transform them into eggs that you can then throw at other enemies or switches. That's nice. Too nice. Why? Because you spend more time throwing eggs at fruit than enemies. Every screen serves up gobs of fruit to eat, but you'll often have to travel two or three screens before you have to jump over something or deal with a single enemy.

The game's lightweight difficulty and brief length don't help. Enemies move at a snail's pace and there's plenty of margin for error when jumping. There's even one candy monster boss that rolls over if you just rapidly press the button to lick him a dozen times. Occasionally, you'll bump into a Shyguy or fall into a pit because Yoshi's butter-coated feet make him slide a bit before changing directions. But that's OK because there are plenty of fruit pieces with which to replenish his ample life meter. Losing one of the six Yoshis you have in reserve is almost impossible! As it is, you only need to complete six levels (out of 24) to complete the story mode, which takes about 30 minutes. You can draw out the experience by replaying the story mode to unlock levels in the trial mode, where you can try for top scores in individual levels. But why would you want to when they're bereft of cleverness or challenge?

Like many of the other Nintendo 64 games that have made the jump to the Wii's Virtual Console service, Yoshi's Story underwent a modest graphical upgrade that has replaced the formerly blurry textures with crisp objects and has significantly reduced the instances of slowdown during boss battles. The trade-off is that rumble support was dropped, just like the other N64 releases. Of course, the bigger issue here is that the game's content is simply uninteresting. Even if Nintendo developed Yoshi's Story with young children in mind, doing so doesn't explain why it's so devoid of the heart and soul that the company usually pours into its games. 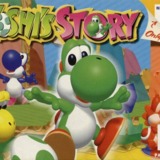