We serve ourselves a bowl of wacky fun with this PlayStation 2 import game.

One of the most appealing aspects of video games is the opportunity to experience an entirely different life from the one you currently live. Rockstar's GTA series lets you experience life's seamy underbelly, Electronic Arts' recent Lord of the Rings games let you roll through Middle-earth like a conquering hero, and SquareSoft's Final Fantasy games all let you experience what it would be like if everyone had big hair and rode enormous chickens, to name just a few recent examples of the breadth of experience available to gamers. But, varied as those experiences are, they pale in comparison to Success' recently released PlayStation 2 import, Yoshinoya. If you've ever dared to dream of living the fast-paced lifestyle of a fast-food employee in Japan, your time has come. Success' game puts you on the daily emotional roller coaster that only a member of the food-services workforce could ever experience.

For the unwashed masses unfamiliar with the game and the Yoshinoya Corporation, allow us to bring you up to speed. Yoshinoya is a company that was founded over a century ago in Japan and that has built an empire around the simple pleasures of a bowl of rice with some thinly sliced beef and onion on top. The chain of reasonably priced foodstuffs has expanded from a family-run store, which opened in a fish market in Nihonbashi, Chuo-ky, Tokyo, in 1899, to more than 1,000 stores worldwide as of 2001. Having conquered the food sector over the last few decades, the chain has set its sights on the video game world with the help of Japanese developer Success and the simply titled Yoshinoya for the PlayStation 2.

So how on earth could a game even hope to capture the essence of such a company in playable form? Surprisingly easily. If you've ever played the classic game Root Beer Tapper, you'll have a small sense of what Success has done. You'll take the role of a bright-eyed and bushy-tailed trainee at a Yoshinoya store who must work his way up through the ranks of the apron-and-hat-wearing set to be the best employee to ever seat a customer, pour tea, prepare a bowl, and shout "Arigato gozaimashita!"

When you start the game you'll have only two servers to choose from, but you can eventually unlock more as you progress. Once you've selected your character, you'll come to a menu screen that shows a 3D representation of the store you'll be manning for that particular level. You'll have to work through three shifts--morning, noon, and night--whose difficulty is rated by the number of beef bowls next to the name. Once you've completed your third shift, you'll "face off" against a lone customer in a boss-fight-style sequence. If you manage to please the customer with your skills, you'll be able to move on to another store and an even greater challenge.

The gameplay breaks down into two distinct types over the course of serving beef bowls. The serving sequences during your three shifts are pretty basic. You'll guide your character behind the counter as customers come in and sit down. When you near them you'll see the type of bowl they're looking for, represented by a thought bubble displaying one of the four face buttons on the PlayStation 2 controller. You'll just have to press the corresponding button to serve them a bowl and send them on their way. Each level will have its own requirements for success, usually revolving around serving a certain number of customers in an uninterrupted chain. This gets to be challenging as the stores you man get larger and the customers get more impatient. If you take too long to serve a customer, the customer will stomp out in a huff and knock the onscreen chain counter back to zero. To add insult to injury, walkouts will also lower the onscreen customer-happiness meter. While this may sound a bit simplistic, there's actually a little bit of depth thrown in. You'll be able to direct customers where to sit, and you can create combos by grouping together customers craving the same kind of bowl. Serving one of the customers in the chain feeds the whole lot of them and adds more time to the game clock, which is always running down. The bigger the group, the more time is added and the more dramatic the effect used to underscore your combo.

The second gameplay type is the "boss fight" that happens at the end of your third shift in the game. A customer will walk in and require your personal attention in a series of fast-paced minigame-style segments that go through the serving process. The "boss fight" begins with a brief intro and the customer placing an order--a sequence of buttons you'll have to memorize and repeat a moment later. You'll then have to pour the customer a bowl of tea, which requires you to stop a meter at the right time as a mug is being filled. You'll then shift to preparing the order, which uses a similar mechanic. You'll have to stop meters as a bowl is filled with rice and the meat mixture is ladled on top.

Following that, you may have to pick up a few more items in a roulette-style sequence that has you selecting specific items from a rolling line of food. The final segment requires you to mash the circle button and give your food a healthy glow before passing it on. (No, we don't really get this either, but trust us, it's amazing to see.) Your offering is then rated as you present it to the customer. Your rating is determined by how well you timed your meter stops. If your work is mediocre, you'll be dissed by some unpleasant sound effects and have to try again. If you did well, your customer will be pleased, and you'll be treated to some loopy graphics effects. Then, depending on the level, you may be required to repeat the process until time runs out on the clock or your customer is completely satisfied. If you manage to do everything correctly, you'll be treated to a promotion and sent off to the next store.

The graphics in the game have a stylized, cel-shaded, anime look that's all big eyes and enthusiastic smiles. Your main view of the action is a roughly three-quarter view of the various stores you'll be manning and their floor layouts. The customers you'll serve come in a variety of distinctive styles that are easily recognizable as they rush your store in search of nourishment. The bosses you'll encounter are a special brand of wacky. They start out as average-looking patrons and wind up as demonic-looking dudes with crazy hair and eyes that say, "I am insane, feed me. Yes, I'm wearing a beef bowl on my head." The look of the action is nicely complemented by amusing bits of animation and dramatic camera effects, most notably during combos or when angry patrons stomp out. You'll even get some camera filters going when everyone is annoyed with you. The graphics receive a nice layer of surreal polish in the form of the various effects used to reflect the success of your bowl-making during boss fights. They range from simple anime-style multicolored lines alternating around your bowl to images of the universe that appear to underscore a really superior piece of beef-bowling.

The audio in the game is a mix of catchy tunes, melodramatic Japanese phrasings, and punchy sound effects that help sell the whole experience. The tunes that will play as you go about your bowl-serving business are a loopy collection of tracks that fit the frenetic action to a tee, and considering that the sound designers worked in some harp music, this is saying something. The in-game voice work is an excellent assortment of Japanese phrasings. While the bulk of chatter comes from your character, the bosses you'll face have some choice things to say as well. Finally, the game's sound effects offer a wacky complement to the onscreen insanity in ways that only a game out of Japan can.

All told, Yoshinoya is quite possibly one of the greatest beef-bowl simulators on the current generation of game consoles. Bold words, we know, but the simple gameplay mechanics, the tight pacing, and the wacky assortment of bosses give it an undeniable charm. The fact that Success managed to squeeze a robot into the whole mix is icing on what is an already appealing cake. If you like your games wacky, or just want to experience the highs and lows of feeding beef bowls to the masses, you will probably want to import Yoshinoya. While the game is in Japanese and has little in the way of English text or voice--with the fantastic exception of a few phrases such as "Wonderful!" and "CPU" (don't ask)--the language barrier is hardly a problem. The game is pretty self-explanatory after about five or 10 minutes of playing. Importing is likely to be the only option open to you if you want to play the game, since we're pretty sure this game won't be hitting the US. For insight into the excitement and wonder of what awaits you, check out our media page. 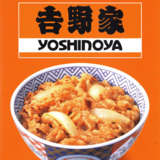