Popular music composer will pen the soundtrack for the new MMORPG, which will be playable at the Tokyo Game Show.

TOKYO--Korea-based publisher Gravity today announced that it has hired famous Japanese composer Yoko Kanno to produce the music tracks for its upcoming massively multiplayer online role-playing game Ragnarok Online 2. Kanno is best known in the gaming industry for her work at Koei, including the Nobunaga's Ambition and Uncharted Waters series. She's also known as the composer behind various anime series, including Cowboy Bebop and Ghost in the Shell: Stand Alone Complex.

Under her contract with Gravity, Kanno will produce a total of 90 tracks for Ragnarok Online 2. The soundtrack for the original Ragnarok Online was created by SoundTemp, a music production studio based in Seoul, Korea.

Gravity will be debuting Ragnarok Online 2 at this week's Tokyo Game Show, where gamers will have their first chance to try out a playable demo. The game will feature graphics styled after the original Ragnarok Online, which had a mixture of 2D characters and 3D backgrounds. The game will have a number of new elements, including the "complex job change system." While the original Ragnarok Online allowed only one job per character, RO2 will let a character switch freely between jobs, meaning the player won't have to erase characters or purchase multiple accounts. RO2 will also feature a new advancement system for equipment, which will level up and become stronger with use.

Gravity Corporation was recently acquired by Softbank, a major IT company based in Japan. Softbank purchased Gravity CEO Kim Jungryool's 52.4 percent stake in his company for 400 billion won ($389.93 million) on August 31---3.5 times more than the market price at that time. Since September 12, Gravity's CEO has been Nichiei Yanagi, president of Softbank's subsidiaries Ezer, Technoblood, and CJ Internet Japan. Softbank's acquisition of Gravity comes after a three-year relationship as the Japanese distributor of Ragnarok Online. 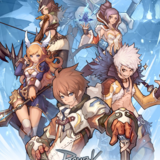