It's not Pokemon yet, but Nintendo and Level-5 are going all out with Yo-Kai Watch releases.

Having made its western debut last year, Yo-Kai Watch is coming back to the United States later this year with Yo-Kai Watch 2.

Nintendo announced today that the sequel will launch in the US for 3DS on September 30. That puts it just under a year after the US release of the first game, which originally launched in Japan--where it's a big hit--in 2013.

Yo-Kai Watch 2 is again developed by Level-5 and features new areas to visit, over 100 new Yo-kai, and more. In Pokemon-like fashion, two versions will be released: Bony Spirits and Fleshy Souls. Each one features rare Yo-kai that can't be found in the other version.

"After being such a massive sensation in Japan, it's great to see the US start to embrace the mischievous and lovable Yo-kai," said Nintendo marketing boss Scott Moffitt. "We're excited to continue bringing fun Yo-kai experiences stateside this year."

Nintendo also announced a new trading card game is on the way. Additionally, Hasbro will release new Yo-Kai Watch toys this fall, including the Model Zero watch that Nate wears in Season 2 of the animated show (which is coming to Disney XD this summer).

Here's how that watch is described in a press release: "The watch includes Yo-Motion technology that brings Yo-kai characters to life in a new way. Fans can insert a Yo-Motion Yo-Kai Medal into the watch and see a projected animation of that character. Hasbro will also release a new series of collectible Yo-Motion Yo-Kai Medals, which are compatible with the new watch, as well as custom Yo-Kai Watch accessories, large plush toys, and electronic figures."

As of yet, Nintendo of America president Reggie Fils-Aime hasn't been seen dancing to promote the game's release. 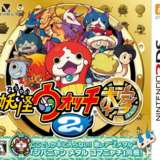