Coming in with a Yang.

Seven new characters are now available for BlazBlue: Cross Tag Battle, playable on PS4, Nintendo Switch, and PC. The most notable addition is Yang Xiao Long, who comes as a free download for all players, as she completes the Team RWBY roster alongside her teammates Ruby, Weiss, and Blake.

The other six characters are divided evenly between two new character packs, which players must purchase. Character Pack 2 contains Aegis from Persona 4 Arena, Jubei from BlazBlue, and Carmine from Under Night In-Birth. Character Pack 3 includes Naoto from Persona 4 Arena, Hakumen from BlazBlue, and Vatista from Under Night In-Birth.

A new trailer offers a glimpse of the seven new fighters in action. Yang gets the most attention, showing off how she can use her signature weapon, Ember Celica, to perform quick, short ranged attacks.

Yang excels at juggling other fighters and preventing them from attacking, and can use Ember Celica to boost forward and close the distance between her and an opponent trying to escape. She can also fire off a blast while in midair to give her a diagonal range attack, the recoil of which fires her back and offers her an opportunity to create some breathing room. Yang is voiced in-game by the same actress who voices her in the RWBY anime: Barbara Dunkelman.

In our BlazBlue: Cross Tag Battle review, Michael Higham gave the game a 9/10 and said, "Whether playing through the story mode alone or against hardened opponents online, Cross Tag Battle is an absolute joy with a surplus of possibilities within its wide roster and versatile fighting system. Even with all the ridiculousness of the overarching plot, I reveled in the charm of my favorite characters and embraced the many moments of fan service. It's a masterful unification of styles and mechanics from four different universes that compels you to dig deeper and dedicate the time to getting the most out of the beloved members of this cast." 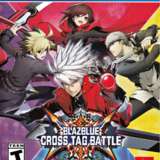