Though Sega's Yakuza franchise doesn't enjoy much popularity in the West, it remains a strong one for Sega, having topped the 5 million-units-shipped mark earlier this year. The man behind that franchise is apparently branching out, as Famitsu (via Andria Sang) reports today that franchise creator Toshihiro Nagoshi has formed a new development house called Ryu ga Gotoku Studio.

According to Famitsu, Nagoshi, who also created the Monkey Ball series, has recruited a number of Yakuza veterans to join him at the new studio. These staffers include Masayoshi Kikuchi, Daisuke Sato, Yojiro Ogawa, and Masayoshi Yokoyama, and Nagoshi plans to continue building out the studio with new hires.

Ryu ga Gotoku Studio's first project will be Binary Domain, which will be available for the Xbox 360 and PlayStation 3 in the US on February 14. Set in Tokyo in the year 2080, players take control of a human peacekeeping team set on regaining control of the city from a robot uprising. However, as the peacekeepers continue their fight against the robots, they begin to ponder whether or not they are becoming robotic or robots are becoming human.

Beyond Binary Domain, the studio has begun work on Yakuza Black Panther 2 for the PSP. The newly announced title is a sequel to the Yakuza spin-off for Sony's portable, and it again follows that game's primary character, Tatsuya Ukyou. Nagoshi told Famitsu that Black Panther 2 will have four other main characters, as well as feature Yakuza 2's Sotenbori district.

The most recent installment in the Yakuza franchise, the zombie-infused Ryu ga Gotoku: Of the End, hit Japanese store shelves in June. For more information on that installment, check out GameSpot's previous coverage. 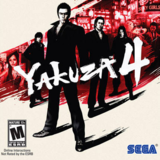