Yakuza 7 was unveiled just yesterday during a press conference with series creator Toshihiro Nagoshi. Titled Yakuza: Like A Dragon in the West, it aims to be a "watershed" moment for the long-running series, introducing a major change to its usual action as combat switches to a turn-based system akin to JRPG games such as Dragon Quest--which new protagonist Ichiban Kasuga is a big fan of. It's a surprising and drastic change straight out of left field... except we've all been here before.

Developer Ryu Ga Gotoku Studio released an April Fools video earlier this year that joked that the Yakuza combat would change to a turn-based system. We already knew that Kasuga was taking over protagonist duties after Kazuma Kiryu bowed out of the series in Yakuza 6: The Song of Life, so his appearance in the April Fools video wasn't anything noteworthy. In truth, the prank-filled day is a bit of a nightmare, with hoax after hoax guaranteeing that you can't believe anything you read or watch. Occasionally a company will put out something funny, but that's usually as far as it ever goes. The Yakuza video was one of the better examples, elaborately reshaping the series as a turn-based JRPG complete with a four-person party, character levels, and skill moves that drink from a pool of SP. It still had that outlandish Yakuza charm, but framed it in a different way where over-the-top attacks are picked from a menu as opposed to being something you activate with Heat and a weapon in-hand.

Now we know why it was elaborate enough to look like an honest-to-goodness video game: Ryu Ga Gotoku Studio was showing us Yakuza 7 the whole time. It's a bold move, sticking a four-minute video for your next, series-altering game up on YouTube five months before officially announcing it. But it worked. No one suspected a thing and now it comes across as an act of sly genius.

Conan Chop Chop, a hack-and-slash action-roguelike with couch co-op, was also announced as an April Fools joke before developer Funcom turned the joke on us and revealed that it's actually a real game. The roguelike, starring a cute little Conan the Barbarian, was due out in September but has since been delayed into 2020 while the team expands the game's scope by adding online multiplayer.

Who knows, maybe Yakuza 7 and Conan Chop Chop aren't the last games to get the April-Fools-but-actually-it's-a-real-game treatment. What was once a throwaway day of obvious pranks is now something worth paying attention to. Maybe the next Sniper Elite game is really a visual novel dating sim about love blooming on the battlefield. That Sonic the Hedgehog battle royale game is starting to sound real right about now, right? And we certainly wouldn't put it past Nintendo turning Kirby square. The possibilities are endless. 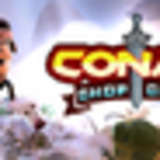