We talk with the director of Xenosaga, Tetsuya Takahashi.

Fans of Xenogears on the PlayStation have been closely following the progress of the upcoming Xenosaga for the PlayStation 2. Developed by Monolith Software, a subsidiary of Namco, the game marks a new beginning for the series. We recently spoke with Tetsuya Takahashi, vice president of Monolith Software and director of the game, and Yoshidumi Makoto, assistant manager for the CS department at Namco, about the new direction for the game.

GameSpot: What led to the establishment of Monolith Software? We've heard that one of the reasons was that Square was not interested in making a sequel to Xenogears.

Tetsuya Takahashi: A few years ago, Square was already planning to focus primarily on the Final Fantasy series. I personally did not favor the idea, and at the same time, such plans can possibly lead to big losses for the company. So I decided to leave Square and started seeking a company which our team can work with in creating a game that we desire. That company turned out to be Namco, so with a mutual understanding in developing this game, Monolith Software was established.

GS: How many staff members are currently in the company?

TT: Right now, about 70 members, including part-time and contract workers.

GS: Among those members, how many have worked on Xenogears?

TT: I think somewhere around 20.

GS: So are all the current staff members on the development team working on Xenosaga?

GS: Do you also receive support from Namco during the development process?

TT: Yes. For instance, the motion-capturing technology was provided by Namco. Other than that, Namco is involved in the production, marketing, and promotion of the game.

GS: When did the planning stages for the game begin?

TT: Though Monolith Software was established about two years ago, I already had some ideas in mind when I left Square, so that would actually be more like three years ago.

GS: How long has the actual development been?

TT: Probably about a year or so ago we started actual development. We spent some time before that experimenting with and understanding the PlayStation 2 hardware, but I think we have spent more time gathering the necessary staff members.

GS: Recently, there have been certain issues like the lawsuit between Nintendo and Enterbrain concerning the PlayStation title Tear Ring Saga. Has Square been concerned about Xenosaga?

Yoshidumi Makoto: Well we're always in contact with Square, and we haven't had any problems at this point. Also, with the recent alliance between our company, Square, and Enix, there are talks amongst the top management group on a regular basis, so I think things are going smoothly.

GS: When a series is created, usually the developers either try to make each a stand-alone game or try to make it a series of games to be played in succession. With this in mind, how would you categorize this game?

TT: In terms of gameplay, it is stand-alone. But in terms of the plot, Xenosaga is a very long story and can't be told in one game. It's something like Star Wars where it takes more than one movie to finish the story, so in that sense it is a series.

GS: It is a given that most of the Xenogears fans will play the game. Role-playing games have different audiences just like sci-fi movies. There are those who like Star Wars, and there are others who prefer Star Trek. What kind of fan base are you aiming for in Xenosaga?

TT: Most role-playing games these days are based on swords and sorcery. I hope [gamers] are looking for something different in the genre, as well as other genres such as action-adventure games, will play the game.

GS: Is Xenosaga a direct sequel or prequel to Square's Xenogears?

YM: Though the development team is the same, they were previously working under Square for Xenogears, and now they have shifted to Monolith Software for Xenosaga. But with our relation between Square, I think it is difficult for us to say it is a direct sequel or prequel. It's probably more suitable to say that it follows the direction and style of Xenogears.

GS: Watching the trailer, we can't help notice that there are some familiar faces from Xenogears. Are these characters somehow related in Xenosaga?

TT: Now that we are under a different company, we figured we should start everything from scratch all over again. Though there are familiar faces that serve as important characters in Xenosaga, others are more like self-parodies, so we don't really want Xenogears fans to overreact. Like movies, sometimes you have the director of the movie or friend of the leading actor appearing as cameos, so it's similar to that.

GS: We've heard that you already have the majority of the plot in mind. So, for instance, Square's Xenogears is technically the fifth episode in the story. Where do you intend to go from here?

YM: This is something which won't happen for a few years--we haven't even decided if we're going to do it in order. (laughs)

TT: Well, we have to make sure the first game sells. (laughs) But yes, when that time comes, we'd like to make sure it will be something worthy of presenting to the players.

GS: In the first portion of the trailer, the character modeling looked more realistic compared to the anime-style modeling in the remainder portion. Why is there a difference between the two?

TT: One of the reasons is that the two different scenes take place in different time eras a few thousand years apart.

GS: Will the game shift between these two time eras?

TT: Basically, the later portion of the trailer is the main story. The first portion will only be used once as an introduction. But if we do plan to return to that time era, we will try to use the same models as much as possible and make adjustments upon making new characters.

GS: Concerning battle systems, what is the big difference between Xenogears and Xenosaga?

TT: The battle system requires more thinking for the players. Other than experience, your characters also earn points after battle, allowing players to gain items, equipment, and skills to customize characters. The amounts of points earned are different depending on how you fight during battles. For example, you would earn more by using special attacks or inducing critical hits.

GS: Does the concept of magic exist in the game?

TT: Something similar to magic can be used by certain characters. Since the game is more of a science fiction, these are more like phenomena which can be explained through physics.

GS: Will there be minigames?

TT: Yes, we plan to include about two to three minigames. We'll be making them more fun to play than Xenogears.

GS: So dungeons incorporate elements such as traps. Are there any other features?

TT: You can break objects on the field map. And through that, a secret path may be found, and perhaps further beyond that is another path. In most RPGs, dungeons are linear--there is a starting point and there is a goal. Our game is about exploring dungeons. We initially had radar displayed on the screen, but we took it out. The reason for that is for players to be able to navigate without the use of radars, and still be able to know where they are.

GS: Can players rotate or switch camera angles in dungeons?

TT: Rotating dungeons are easy to do with the current technology, but by doing that players will just get lost. In order to reduce the stress on players, we have decided to keep it at a preset camera angle.

GS: How about the loading times? Will the game be compatible with the PlayStation 2 hard disk drive?

TT: In the playable demo we had during the recent Tokyo Game Show, you'll notice how long the load times were, but actually we haven't tweaked the load times yet. We'll be working on that. And yes, the game will be compatible with the hard disk drive, serving as a data cache. It will probably take around 40 minutes to install the entire game.

GS: Are there any significant differences in the graphics for the event scene and the in-game scene?

TT: During battle, we use what we call the middle-end model, which uses about 5000 polygons. For the event scenes, the high-end model will be used, which takes about twice the polygon count. It emphasizes more lighting and reflection on the character models, so you can see the shimmer in the skin and eyes as well as more vivid hair movements.

GS: So will the two different models be used specifically only during those instances you mentioned?

TT: Not necessarily. For instance, during scenes where there are a lot of character models involved, we may use the middle-end model instead.

GS: Seems like there is a lot of data involved with the game taking two DVD-ROMs.

TT: Yes, that is true. Though we can technically run each individual cutscene in real time, focusing on it too much can destroy the flow of the game. For example, even if two cutscenes were running in real time, there will be a short loading time in between, which becomes stressful for the players. So we might as well run those two cutscenes as one. Whether it is prerendered or real time, the player sees the same thing. For us, we'd like to make it comfortable for the players.

GS: Regarding sound and music, Mitsuda Yasunori has traveled overseas and integrated Gregorian chant into his compositions. What are some of the new challenges, and how does it show in the game?

TT: Most game music has only used a set number of compositions and is quite limited with the use of looping and sampling. I've discussed this with Mitsuda and made the compositions more specific for particular scenes, sort of like motion picture soundtracks. Well, maybe not each and every single scene but as much as possible. I think that is the big difference.

TT: No, but perhaps next time. It will probably end up becoming four DVD-ROMs if we intend to do it in this game, so it's quite difficult. It might not even fit, and you'd have to use the hard disk drive to install the game again after disc two. (laughs)

GS: Has localization for the game started?

YM: After the Japanese version is done, localizations will begin.

GS: Is there a possibility of porting to other consoles?

YM: We have no idea. The PlayStation 2 is the most suitable hardware for the market right now.

GS: We've heard from an analyst report about the possibility of Xenosaga Online.

YM: We may have plans for that in the future, but we haven't started business with online gaming, so there are still a lot of uncertainties. But someday we'd like to make an online game.

GS: Any message to devoted fans of Xenogears and the upcoming Xenosaga?

TT: With the development on a new hardware, both visually and content-wise, we intend to make it deeper and more involved. For fans and newcomers, we hope everybody will enjoy playing the game.

GS: Thank you very much for your time. 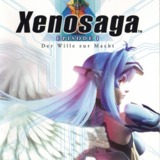