A TV show based on the Honey, I Shrunk the Kids-like game is in the works.

Developer Obsidian (Fallout: New Vegas, The Outer Worlds) is bringing its latest game, Grounded, to the small screen. According to Deadline, Star Wars: Clone Wars writer Brent Friedman is in charge of the TV show, which will be an animated series. Friedman is also working on the Earthworm Jim TV series, so Grounded isn't his first video game adaptation.

Brien Goodrich, who worked on the Halo video games, is writing the story for the Grounded TV series with Friedman. No cast or directors have been announced yet.

According to the report, the Grounded TV show will take place in the same universe as the game, following four friends who get shrunk down to the size of two inches tall. They must then work together to survive in a backyard full of bugs and also unravel a "vast corporate conspiracy." Minus the conspiracy part, this sounds like the plot of 1989's Honey, I Shrunk the Kids starring Rick Moranis.

"We couldn't be more excited about diving into the whimsical universe of Grounded. This partnership will be one of great collaboration, expanding on an already wonderful journey of exploration and adventure," Bardel CEO Tina Chow said.

Grounded is just one of many video games being adapted for TV or film. Another one is Fallout, which is in the works at Amazon--some new set photos recently emerged.

Following a successful pre-release phase where it reached more than 10 million players, Grounded is set for its 1.0 release in September. Some of Obsidian's other upcoming games include Pentiment, Avowed, and The Outer Worlds 2. 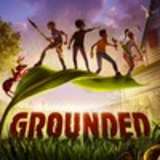