The Xbox 360 is best enjoyed at HD resolutions, but there are plenty of launch games that still look great on normal televisions.

Comments
All this talk about the HD era and the Xbox 360's wonderful high-definition resolutions may promise a wonderful future for console graphics, but it's also a cause for concern for many game enthusiasts. There are a number of standard-definition-television owners wondering if Xbox 360 games offer any graphical improvements for gamers who don't have a television that can support 720p or 1080i video.
By James Yu

Last time we checked, almost all of us still have standard television sets at home. We'd be lucky to have 480p support let alone any real HDTV resolutions. With that in mind, we've gathered together nine Xbox 360 launch games that also have Xbox versions for a head-to-head graphical comparison between games developed for both systems. We kept resolutions at 480p, so the 360 won't be able to hide behind the image-quality advantages a higher resolution gives you. Normal televisions support 480i, but the image quality should be close to 480p, especially if we're looking only at still images.

Note that the quality of the screenshots in this feature aren't as nice as the usual game screenshots we obtain using special cables and image capture devices. With the exception of one Need for Speed Most Wanted shot, we used normal component cables with both systems to keep the comparison even.

Madden 06 for the Xbox 360 isn't just a port of the original Xbox version. EA has rebuilt the game from the ground up and has put a lot of work into making Madden 06's graphics worthy of the Xbox 360 platform. The game features improved player models and animations and even-more-realistic stadium environments. The game shines in HD resolutions, but the graphical improvements still come through at 480p, albeit grainier.

The graphics are fantastic, but EA had to cut several features to get the game ready in time for launch. You may want to stick with the Xbox version if you want a Madden game that has a full franchise mode rather than the eviscerated version cobbled together for the 360. 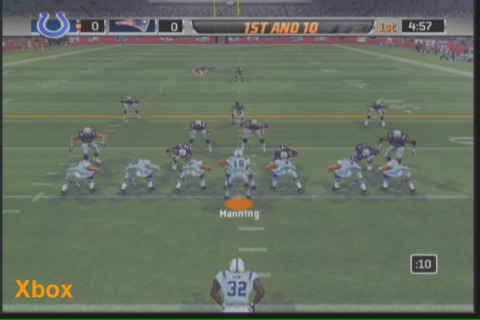 If you already have the PS2 or Xbox version of Tony Hawk's American Wasteland, don't bother getting the Xbox 360 version. The game looks and plays exactly like the other versions released on older platforms, except the 360 version forces you into a widescreen mode.

The 360 gamepad's new shoulder buttons do help with control, but it isn't worth shelling out the extra $10 for the 360 version of the game. Playing in HD doesn't improve the game much either since it exposes the simple character models and glitchy environment bugs. 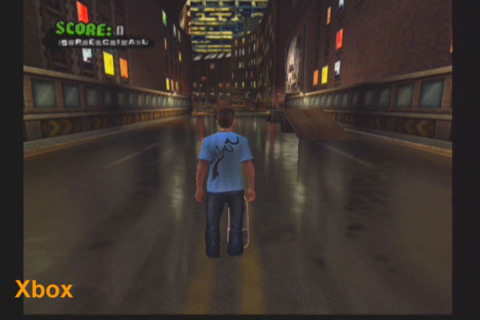 The Xbox version of Peter Jackson's King Kong already looks fantastic, but the Xbox 360 version gives its Xbox competition a good thrashing like it's a misbehaving T-rex. The game uses the 360's hefty GPU and memory subsystem to produce improved lighting effects and juiced-up monster models for an even more memorable Kong experience.

The jungle environments benefit from high-resolution textures and excellent lighting. Resizing the image down to 480p adds a definite blockiness, but you can still recognize the quality of the source. 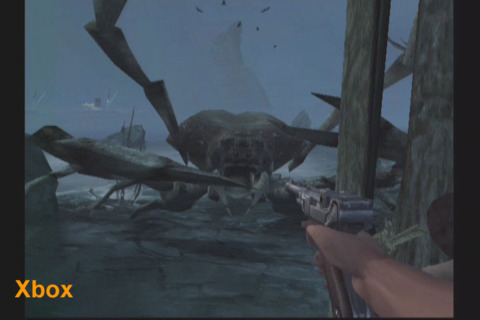 Those looking forward to taking gunslinger Cotton White through a few Xbox 360 Wild West adventures might just want to stick to the more affordable Xbox version of the game. As far as we could tell, the Xbox 360 version offers very little improvement over the Xbox version at 480p.

The environment looks marginally better, with improved textures and additional shrubbery here and there, but it's still very difficult to see any real differences between the 360 and Xbox versions at normal resolution. The game also appears unexplainably dark on the 360 (the shadows engulf poor Ned in our 360 shot). The game definitely looks better at 720p, but stay away from the Xbox 360 port if you don't have an HDTV--it's pure snake oil at standard resolution. 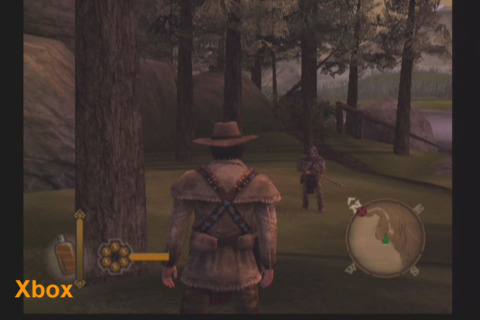 Need for Speed Most Wanted

Need for Speed Most Wanted for the Xbox 360 is exactly what a next-gen console launch game should be. EA has made illegal street racing even more fun by giving the game high-resolution textures and a whole new dynamic lighting system.

Normal maps on cars and street surfaces function as the next-gen secret sauce, smothering the game in specular-lit goodness. Technical problems with the Xbox version forced us to take the Xbox shot using method that produced a higher quality image. The 360 screenshot may not look as sharp in comparison, but the new lighting effects absolutely stand out when the game is in motion (note: images do not show the same car or track). 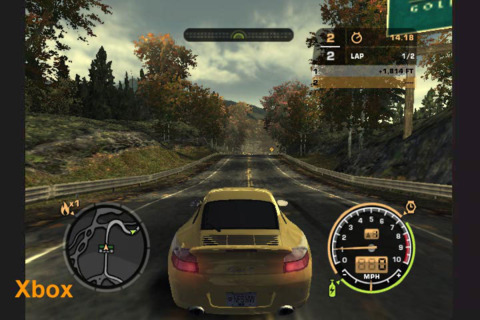 Just one look at the finely detailed player models and the sharp basketball courts can tell you that NBA Live 06 is special on the Xbox 360. The game sports a brand-new game engine built to take NBA graphics to the next level. The 360 game doesn't have all of the features available in current versions just yet, but EA promises to fill out the gameplay in future franchise updates.

Players still look good at standard resolution, way better than on the Xbox, but frame rates can be inconsistent, and player animations sometimes pop between actions for uneven play. Text is also noticeably more difficult to read at normal resolution. 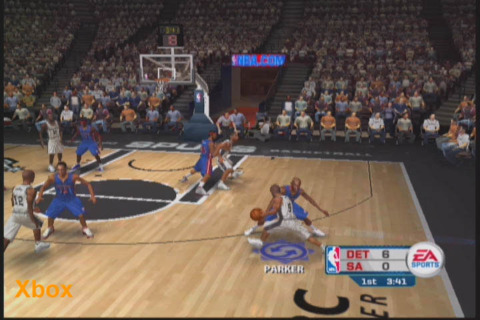 NHL 2K6 looks like another game that stands out only in high-resolution mode. Playing in 720p will give you sharp player models, high-resolution textures, and great-looking ice, but switching over to 480p gives you disappointing graphics that could be mistaken for the Xbox version.

We had a difficult time telling the difference between the 360 and Xbox 480p in-game screenshots since the player models looked the same. However, we did notice that the on-ice NHL and 2K Games logos had a higher resolution in the 360 version. 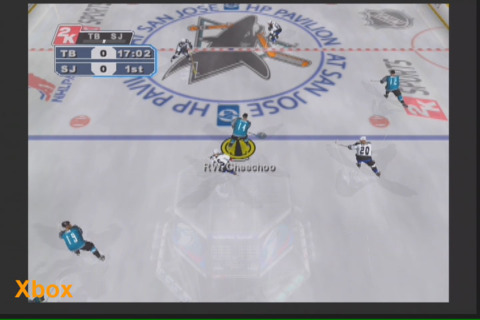 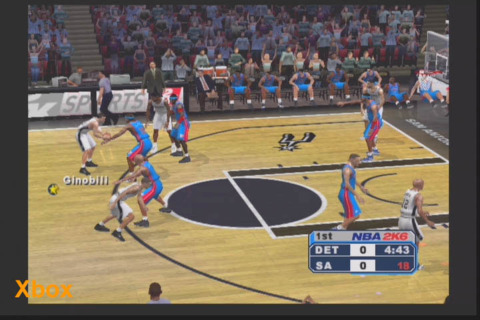 Tiger Woods PGA Tour 06 is another EA Box 360 game that features upgraded graphics, but, like other EA sports games, it's also missing game content available on older platforms. You can play only six courses in the Xbox 360 game--the PS2 and Xbox versions both have 14 courses, but the six courses available in the 360 version are so beautiful that you'll forget about the others.

Tiger has never looked so good on the console. He has an impressive player model with lifelike facial features and realistic clothing. You can now see self-shadowing on the player models, and the course environments look absolutely stunning with new textures and detailed course designs. The 360 shot looks washed out in comparison to the Xbox's color saturation, but we can assure you that the 360 game looks fine on its own. 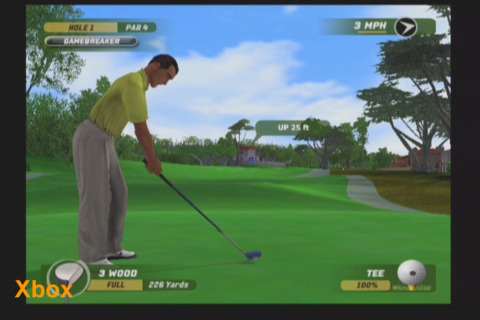 After taking a look at nine Xbox 360 launch games and comparing them side by side against their Xbox counterparts, it's clear that we can't automatically assume that the Xbox 360 version of a game will be significantly better than the Xbox version, especially if you don't have an HDTV.

If you only can play at standard resolution, games like Gun, NHL 2K6, and Tony Hawk's American Wasteland are only marginal ports that offer very little over the Xbox versions of the same game. At the very least, you can expect to see higher resolution textures, and some will give you a new widescreen look, complete with a stretched-out UI overlay. Not all games were disappointing--many provided jaw-dropping graphics available only on the 360. Need for Speed Most Wanted, King Kong, and all of EA's sports games feature graphics upgrades that scream next-gen, just oozing with high-resolution textures and new lighting systems. The Xbox 360 is best enjoyed at HD resolutions, but there are plenty of launch games that still look great on normal televisions.