Here's an exclusive look at 14 minutes of new gameplay for the horror-FPS coming to the Xbox Series X.

Ebb Software's Scorn, a dark and grotesque horror-adventure game set within a bio-mechanical labyrinth, has been many years in the making. First revealed in 2016, Scorn is a narrative-driven FPS that blends Bioshock's grotesque body-horror and action gameplay with the bizarre and nightmarish imagery from H.R. Giger's work on the Alien franchise. Scorn will be making its debut on PC and for the Xbox Series X|S as a next-gen console exclusive, with a planned release set for sometime in 2021. Ebb Software has now revealed more of what's to come with the game, showcasing a near-final look at the horror game.

Ahead of the Xbox Series X and Series S making their debut on November 10, GameSpot has exclusive gameplay showing off nearly 14 minutes of the game's grotesque environments that players will be able to explore, along with the many organic weapons that can be found within. This gameplay, running on the Xbox Series X, shows a lot of the game's mood and dark horrors that await.

In a similar vein to Bioshock, Scorn drops players into a strange environment filled with hostile enemies and a peculiar atmosphere that hints that something has gone wrong. Scorn takes this approach a bit further by focusing on a setting that feels totally alien and unnatural, which gives it something of an alluring, yet still unsettling vibe. To survive, you'll have to embrace some of the more grotesque and bizarre elements found within the bio-mechanical hellscape. As you can see, it brings to mind the work of some classic science-fiction artists.

In the gameplay video, there's a sense that the game puts players in a state of confusion, which only seems to become more palpable as the gameplay demo progresses. The imagery shown off in this video is extremely weird, but it's still interesting--especially for fans for enjoyed the Alien series. According to the developers, Scorn's visual style takes some direct inspiration from H.R. Giger and from the works of surrealist artist Zdzisław Beksiński, which puts you in a constant state of discomfort, but still leaves you curious about its origins.

For more on Scorn, and other Xbox Series X|S games, be sure to check back with GameSpot for more in the weeks ahead as we enter the next generation. There is plenty more gameplay and next-generation info on the way. 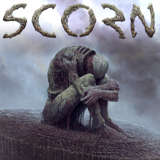