Xbox One, PS4 Getting Chivalry: Medieval Warfare in December

Because there aren't enough games on consoles where burning oil is a weapon.

The game, developed by Torn Banner Studios, will come to current-gen consoles with more than 25 maps and 24-player online multiplayer. It offers support for dedicated servers and adds a new six-player Horde-style mode. This wasn't detailed in full, but will presumably operate like similar modes where players work together to defeat increasingly difficult waves of AI-controlled enemies.

Originally released on PC in 2012, Medieval Warfare has since been ported to Xbox 360 (in 2014) and PS3 (earlier this year). This new version may look somewhat nicer than those, but as seen in the trailer and screenshots above, the graphics are somewhat dated.

That may explain the game's pricing--it'll cost $20 on both platforms. A $30 Ultimate Edition will also be available that bundles the game with four cosmetic DLC packs that will be sold separately for those who buy the standard version.

Here's how Activision describes their contents:

Preorders will only be available for the Xbox One versions, which will begin on November 25. 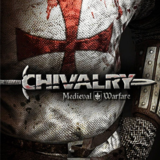