As scheduled, the latest Xbox Live update is now up, running, and ready for download. As outlined on the official Xbox.com site, the new update brings a variety of features to the Xbox 360's online service, which boasts more than 20 million users. (To date, more than 30 million Xbox 360s have been sold worldwide.)

As seen in the video above, the update tweaks the 360's Netflix streaming capabilities to allow users to edit their movie queues and have their Avatars watch movies in a Mystery Science Theater 3000-style theater. However, today Microsoft reiterated that its arrangement with the Los Gatos, California-based movie rental service is the only one of its kind in the industry. 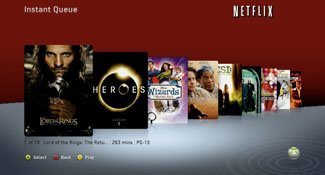 "This exclusive partnership offers you the ability to instantly stream movies and TV episodes from Netflix to the television via Xbox 360," the company said in a statement aimed at rumors that the service is coming to the PlayStation 3 and Wii. "The Xbox 360 will be the only game console to offer this movie-watching experience, available to Xbox Live Gold members who are also Netflix unlimited plan subscribers, at no additional cost."

Also live today is the Avatar Marketplace, which allows players to purchase new clothing and items for their virtual alter egos on the service. In addition to a selection of free clothing, the virtual mannequins can be outfitted with premium brand-name items from clothiers Adidas, Quiksilver, Roxy, and Tokidoki, along with game-themed attire from Star Wars The Clone Wars: Republic Heroes, Gears of War 2, BioShock, and several Halo games. Offerings include an Adidas trucker hat for 80 Microsoft points ($1), one of three BioShock Big Daddy helmets for MSP160 ($2), a set of COG armor from Gears of War for MSP320 ($4), and a remote-control Warthog toy from Halo for MSP320 ($4). 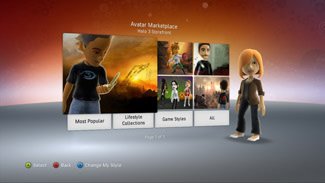 Last but not least, today also saw the launch of Xbox Live's new Games on Demand service, which offers a variety of full Xbox 360 catalog titles for the console. The games' cost has proven controversial in other territories, with some titles going for more than double their retail prices in Australia and New Zealand. However, in the US and Canada, the Games on Demand store has a much lower two-tiered price structure--$19.99 or $29.99--with prices in dollars, not Microsoft points. However, many Games on Demand prices are still above that of used copies at retailers such as GameStop, which is currently offering Mass Effect for just $14.99 pre-tax and shipping.

Since last week, the Games on Demand Store's lineup has also changed slightly, with Atari's Test Drive Unlimited disappearing and Electronic Arts' Battlefield: Bad Company materializing without fanfare. Manuals for the games can be downloaded and printed from the games' respective pages on Xbox.com, though they cannot yet be ordered through the site for automatic download to 360s.

Today's Xbox Live revamp did not include several Xbox Live features promised during Microsoft's E3 press briefing. Microsoft has previously said that 1080p video playback, Zune video downloads, and integration with Twitter, Facebook, and GameSpot sister site Last.fm are all due "later this fall." Speaking with game blog Joystiq, Microsoft is also considering adding Netflix search to the service as part of a future update beyond the one later this year. 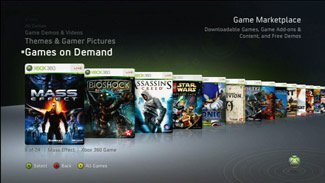 There are 332 comments about this story
Load Comments (332)