Get your friends online to make some deliveries on Nintendo Switch, PC, PS4, and Xbox One.

Xbox Game Pass subscribers of both the Standard and Ultimate tiers have a brand-new quirky ragdoll game to play on Xbox One with the release of Totally Reliable Delivery Service.

The multiplayer physics game--which just launched on Nintendo Switch, PC, PlayStation 4, and Xbox One for $15--tasks you and up to three friends either online or offline with delivering packages across an expansive world using any means necessary. This includes taking to the skies in a helicopter, traversing the ocean on a speedboat, darting around the world on a rocket, and more.

TRDS was developed by We're Five Games and published by TinyBuild. It features very cartoonish visuals akin to No Brakes Games' Human: Fall Flat, hilarious ragdoll physics, and an irreverence to ensure it doesn't take itself too seriously. You can push your duties to the side in favor of playing with the game's many toys, complete deliveries on-time to earn various rewards, or otherwise just cause absolute chaos in totally bonkers ways.

Though Totally Reliable Delivery Service officially launched today, the game is also free on PC through the Epic Games Store until April 8. 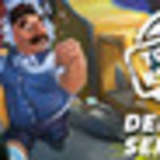