The action-RPG from Exor Studios is headed to Xbox Game Pass on day one later this year.

The game doesn't have a release date yet, however. The console and PC editions will release at the same time, and they'll both be included on Xbox Game Pass at no extra cost. The Riftbreaker is also in development for PlayStation consoles where it will sell for full price. Xbox and PC users will presumably also be able to purchase The Riftbreaker outright if they don't want to sign up for Game Pass.

While you have to wait until fall to play The Riftbreaker in full, a prologue is now available on PC. The free demo offers a glimpse at the events that take place before the main game.

The Riftbreaker follows Captain Ashley Nowak, who is part of a group known as the Riftbreaker. She has a powerful mech suit and ventures into a planet called Galatea 37 where she fights against alien creatures.

The Xbox Game Pass announcement video for The Riftbreaker shows off more of the game and covers some of its technical features and systems, including real-time ray-tracing and a day/night cycle.

In other Game Pass news, EA's "dodgebrawl" game Knockout City launched today, May 21, for Ultimate subscribers, while members can also pick up the fishing game, The Catch: Carp and Coarse Fishing. For more, check out the full May 2021 Game Pass lineup. 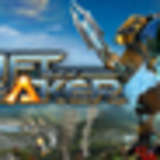