"Lifeline" expansion coming to zombie game May 30 for $7.

State of Decay developer Undead Labs has announced that the Xbox 360 zombie game's Lifeline expansion will arrive on May 30 for $7. This is actually ahead of schedule, the studio points out, and is the result of both Undead Labs and Microsoft "burning the midnight oil."

The Lifeline expansion is now in final certification, Undead Labs said. In the expansion, you'll control Greyhound One, a small military unit sent to the city of Danforth to rescue scientists whose research is critical to fighting the zombie outbreak.

It's not clear when Lifeline will be available for the PC version of State of Decay. The game has sold over 1 million copies to date across both platforms.

Looking ahead, there's more than just new expansions for State of Decay in the works at Undead Labs. Earlier this year, the studio confirmed that it had signed a multi-year, multi-title agreement to extend its development relationship with Microsoft, leading to speculation of a possible State of Decay sequel. Undead Labs has also previously spoken about an MMO called Class4, though the current status of this project is unknown.

For more on State of Decay, check out GameSpot's review. 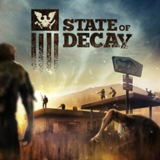