While the latest edition of the Unreal Engine was used to power Gears of War, the Xbox 360's biggest title of the holiday season, the tool is versatile enough to be used in much smaller scale projects. Gamers will get a chance to try out one such project this week, as Microsoft today confirmed that Naked Sky's Unreal-powered 3D action game RoboBlitz will be this week's Xbox Live Arcade Wednesday offering.

As the maintenance robot Blitz, players are called upon to thwart a band of space pirates' sinister plans for his homeworld. The game features a mix of puzzle solving and action set across 19 levels and boasts physics-based gameplay that lets players solve puzzles several ways through the clever use of a variety of tools and weapons.

RoboBlitz will cost gamers 1,200 Microsoft points ($15) and should be available starting at 1 a.m. PST Wednesday, October 6. A PC version of the game was released last month. 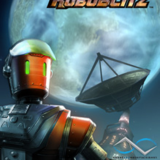