We try to save some humans from the alien invasion but end up shooting them instead in our first hands-on demo of Defender for Xbox Live Arcade.

BARCELONA, Spain--Tucked away in the corner of the demo area at Microsoft's X06 event in Barcelona was an impressive array of classic games for Xbox Live Arcade. Perhaps the most famous of these is Defender, the tough-as-nails horizontal space shooter that originally appeared in arcades more than a quarter century ago. We picked up a controller to see how many aliens we could kill and humans we could save before getting blown to bits.

In case you aren't familiar with the game, Defender is a horizontally scrolling shooter where you fly in a ship above the land and fend off an alien invasion. The aliens come from above and try to abduct the small humans at the bottom of the screen. It's your job to defend the helpless humans and destroy the aliens.

For the most part, you do this by flying around and shooting all the aliens you see. You can change directions at any time and fly anywhere you want to, and the ship controls well with the analog stick on the Xbox 360 controller. If anything, the stick is a little too responsive, but it doesn't take long to adjust to. If you touch an alien or get shot by one, you die. If all the humans are abducted, the planet explodes and the humans come back as mutants who try to kill you. You have to survive for several rounds before the humans return to their original form. In addition to lasers, you come equipped with smart bombs. These bombs are activated with the B button, but you have to use them sparingly because you only start with three. You also have the ability to jump into hyperspace and teleport to another area of the level at random. It's not as useful as the smart bomb because you never know where you'll end up, but it can still be a good way to get yourself out of a pinch when the action gets too intense.

Defender looks as simple as you might expect from a game that came out in 1980, and overall it seems like a faithful port. The Xbox 360 controls work well, much better in fact than the original arcade controls.

In addition to the new controls, there are added achievements, as well as online multiplayer. If you want to play with a friend, you can take turns playing one life each until you die, with the winner being the person with the most points in the end. It's not the most exciting multiplayer, but it's still a way to share your love of a classic with a friend. The achievements range from making it to the second wave without losing a single human to winning 30 Xbox Live matches to scoring 25,000 points.

There's no release date announced for Defender at this time, and if past Xbox Live Arcade games are any indication, you won't have much advance warning before this one drops. Be sure to check back here often for more information and our full review when the game is released. 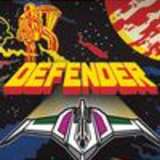