We spend some time enjoying all the craziness that Crackdown has to offer at Microsoft's X06 event.

BARCELONA, Spain--One of the featured games at Microsoft's X06 event in Barcelona is Crackdown, the open world action game from developer Real Time Worlds. We took some time to get a feel for the concept, which could be described as equal parts The Incredible Hulk and Grand Theft Auto. That's because your character is a bionic special agent with powers that let him jump high, climb on ledges, throw massive objects, and survive falls from great distances. But at the same time, he can do the normal, everyday man-on-the-street tasks like steal vehicles, drive over pedestrians, and shoot gangsters.

Crackdown has multiple gameplay modes. Time trials are presumably racing events; cooperative multiplayer missions let you team-up with other players online; and play now mode drops you into the world at a checkpoint of your choice and lets you accept missions or cause trouble as you please. We chose the play now mode since it seems to offer a bit of everything.

We started off on top of a building on the far west end of the city, which appears to be made up of large sections of land that are connected by bridges and tunnels. We began by hopping off the rooftop and taking to the crowded streets. We immediately made the mistake of running across a freeway, where the cars don't seem to slow down for bionic special agents. After getting knocked to the ground, we got up and started shooting gangsters, who were indicated by a yellow icon above their heads (as well as by the fact that they started shooting at us first). The shooting simply requires you to hold the left trigger to lock onto a target and pull the right trigger to shoot. The system worked well in our experience, and we found it easy to quickly switch targets with a flick of the left analog stick.

We were curious to see how the vehicles handled, so we instinctively ran up to a car and pressed the Y button to hop in. It seems a bit more difficult to steal a vehicle in Crackdown than it does in Saint's Row or Grand Theft Auto, because the drivers tend not to slow down as readily, and you have to be positioned just right to be able to enter the vehicle. We drove a wide variety of trucks and cars in the game, including a large cargo truck, a puny hatchback, a muscle car, and an agency vehicle (this game's equivalent of a police car). The vehicles all handled differently as you'd expect, with the faster cars being much more difficult to keep on the road. The vehicles get even more slippery as they take damage, and when you're driving on nothing but bare rims, you might as well just get out and find a new ride. But just because you can't drive a vehicle doesn't mean you can't use it. If you find yourself in an upside-down vehicle, you can hop out and pick the vehicle up to hurl it at people, or you can even kick the vehicle to flip it back over and continue driving it around.

There are several missions in the game, and often a screen will appear telling you to waste a certain criminal. This screen can be a bit annoying because the alert completely interrupts the game to tell you what to do. Some of the missions are less intrusive, such as the race missions. In these missions, you drive up to a highlighted area and wait for a few seconds until given the signal to go. You then drive through checkpoints as fast as you can. The race we ran started off simple enough, but it became much more difficult when we had to drive through narrow lanes with row upon row of explosive barrels on either side, with the slightest deviation from the course meaning certain death. That kind of ridiculousness seems to be the norm in Crackdown.

We enjoyed the mayhem of Crackdown, and we're looking forward to playing more of it, especially the multiplayer mode. Stay tuned to this gamespace for more details before the game ships next year. 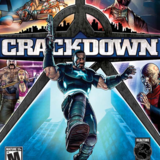