The X-Men game ships today in conjunction with the movie release.

"The X-Men characters are wonderfully suited to the creation of a video game, and X-Men Mutant Academy's stunning graphics and dynamic gameplay have really allowed us to bring to life some of the most popular super heroes of all time," said Steve Crane, senior vice president of Activision Studios. "The game not only draws on the X-Men's 36-year history, but also incorporates elements of the X-Men movie - striking a balance that is sure to appeal to a wide audience." 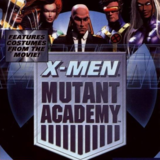