The aliens have landed, and they've infiltrated every aspect of human life. MicroProse lets you strike back in the third installment of the popular X-COM series

With its amazing turn based combat engine, customizable soldiers, absorbing plot and brilliant game concept, the original X-COM: UFO Defense took strategy gaming to a new level of excellence. Up against an alien race armed with superior technology and resources, players were forced to research new armaments, capture and interrogate monstrous alien soldiers, and rally world support (and funding) for their cause. For those who played, the game seemed more like a lifestyle than entertainment, rewarding long hours of devastating battles with one more nation's funding, one more weapon researched, or one more piece of the alien mystery revealed. Ready to capitalize on the success of their original product, MicroProse quickly released X-COM II: Terror from the Deep, a sequel that, while just as good as its predecessor, left many gamers unsatisfied due to its lack of originality and inspiration. Not content to leave the series as is, the designers at MicroProse UK have put together a new game that promises to bring all of the original title's superb storytelling and suspense and meld it with an optional real-time combat engine and frightening new alien infiltration powers. Yes, things have changed quite a bit. Rather than give players a whole world to look after, X-COM III: Apocalypse initially puts the reformed alien control squad in charge of guarding a single enclosed city. Each city (the layout of which is randomly generated each time a new game is started) is immense, with vast landscapes featuring over 50 different buildings. Unlike the repeating building interiors of the original two titles, each building in X-COM III is completely unique, with its own floor plan, its own hiding places, its own secrets. In order for players to successfully complete the game, they'll need to become very familiar with the layouts of many of the structures. Tom Nichols, one of the X-COM team explains, "By the time you finish this game, you will have explored every building, and engaged in combat in them, perhaps even multiple times." To help with this exploration, an overhead map has been added, complete with lines showing the projected path of your agents in motion.

Funding comes from the city at large, but like the individual nations of the first game, the player must keep different factions (the police, the church, the business sector) happy and healthy in order to receive maximum funding. If the aliens are allowed to infiltrate an individual organization, a serious decrease in outgoing resources will result. Players then have to enter the affected buildings, ferret out the intruders and then mercilessly kill them.

The actual process whereby this killing is achieved is where X-COM III's takes its biggest turn from the path of its predecessors. Unlike X-COM and X-COM II, which were solely turn based, X-COM III also offers the option of switching over to a real-time combat engine. Taking this option obviously affects every aspect of gameplay, but by offering players a choice, MicroProse has avoided offending X-COM veterans while gaining the potential to draw in new real-time combat fans - and if the success of Command & Conquer and Warcraft II is any indication, there are plenty of new players to be had.

In addition to the real-time option, there are other important modifications of the original combat engine. X-COM soldiers are now a great deal more customizable (players can create individual faces for their team), and have added crawling, climbing and jumping to their movement repertoire. All of this comes in very handy when avoiding the new problems created by a fully functional gravity engine that, for example, ensures that a building's ceiling will collapse if players insist upon shooting too close to supports - even if they're standing beneath it.

Those bent on destruction will have a score of new weapons at their fingertips including disruptor beams, 40 mm autocannons, stasis field bombs, sniper guns, force webs, power swords, and a mysterious device called the entropy launcher. Armor also comes in various new shapes and sizes, and allows players to protect their legs, each of their arms, their torso and their head separately. In addition to personal weapons, the game promises to include a nice complement of new vehicles that may be customized with different weapons and engines.

There's plenty more about X-COM III to talk about - enough to make it one of the most important strategy releases of next year. The game's brilliant neo-fifties visuals, huge rampaging monsters, and multiplayer options (the designer's expect to enable up to eight players to work together against the alien menace) all are icing on what looks to be a delicious cake. Look to the skies strategists, the moment of truth is upon you… 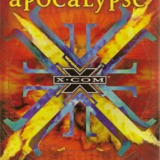